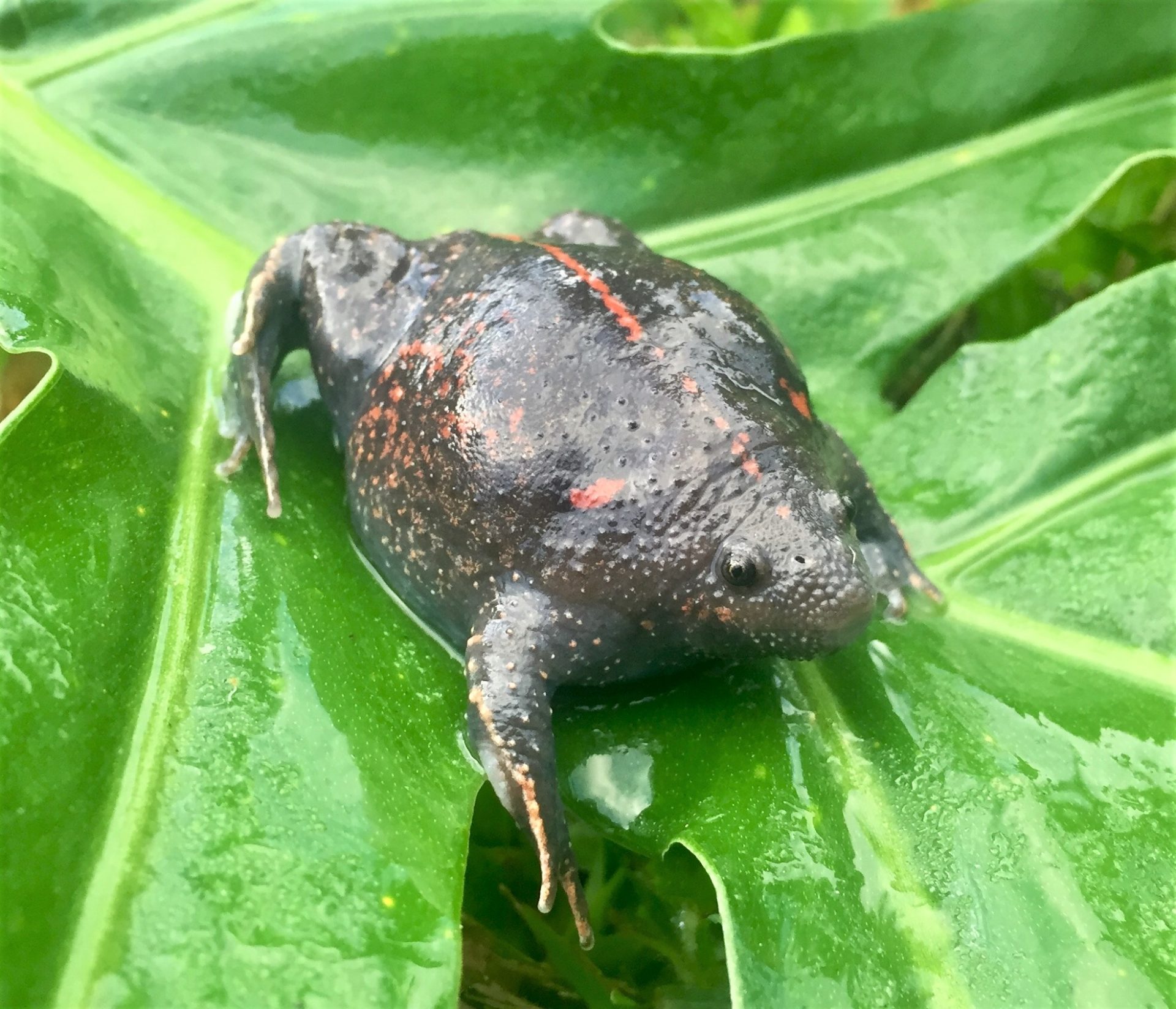 January 21
Life in the jungle: I started my morning continuing and hoping to finish digging my waterline trench.  I did get a pleasant surprise when I dug up a Mexican Burrowing Narrow-mouthed toad.  And I did not get far into my morning when it started to pour rain.  During the downpour I more or less collapsed into my hammock for a nap.  While I find yesterday’s email from Jack rather amusing it’s not everyday someone attempts such a blackmail you.  So, it had me tossing and turning for a while last night causing little sleep. 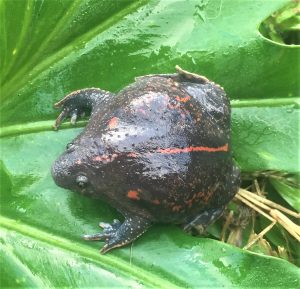 After the rain stopped water was everywhere and my trench was also full of water.  Trying to dig a trench in clay mud was miserable.  I did not get very far and the rain started again.  So back inside I went until it stopped raining.  On my next attempt to dig in the mud I decided to give up on this job a few days until the ground dry’s.  But then it started to rain again.  This time I more or less gave up on the day and took my end of day shower which was a bit of a mistake as it was the last bit of rainfall for the day.  Instead, I watched some Star Trek.  After a few episodes I knew I needed to be far more productive.  So, I wrote my Belize blog posts Part 5, 6, 7 and 8.  I am very behind on my writing.  But with no internet to post my blog posts my motivation to write is low.

January 22
Life in the jungle: I needed to swing a machete this morning.  It seems like it’s been forever since I swung one.  I started cleaning in the coconut field for a few hours.  While I haven’t spent too much time chopping in the field lately, I feel I am keeping the field in check against the worst evasive weeds.

After breakfast I decided to chop a wide lane way along the top of the river bank along my river frontage.  I think I will graze sheep in my front yard when I get my coconut field fenced and sheep pen built.  Of course, I will need to fence my yard/house for the sheep.  But I will also need a fence line along the river bank to keep the sheep way from the river bank as that is where crocodiles would be waiting for them.  [I have since decided that many of my coconut trees are too small to have sheep grazing in that field.  My idea to raise sheep is on hold indefinitely.  I have since decided to plant fruit trees between my coconuts with the hope that in a few years “all” my fruit trees and coconut trees will be tall enough to be out of reach of sheep.  In the mean time planting fruit trees between my coconuts, I am not wasting space or the time it will require for my coconut trees to grow taller.]

When the top of the river bank was completed, I started to make my way along the road side fence line where there is an existing fence.  Unfortunately, just like the existing fence line in the coconut field that follows the road this fence line has been neglected for so long that the old barbed wire will have to be removed and replaced.

In the afternoon me and Heath (my guest) went grocery shopping and stopped at Verna Mae’s for a few beers.  Upon returning to the house, I was so exhausted from chopping as long I did today in combination with a few beers I collapsed in my hammock and did not get out of it until dark.

January 23
Life in the jungle: I started my morning working at the ponds.  It’s been more than a few days since putting some time cleaning off the mounds for future papaya trees.

I found a dead Fer de Lance in the crawl space under the house.  I must have stepped on him getting my bike in the dark.  It’s kind of crazy to think that I stepped on and killed the most dangerous snake in the Americas underneath my house and had no idea that I did. 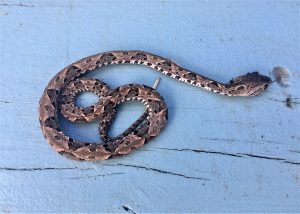 A dead Fer de Lance that I found underneath my house

The rest of the day was a full day doing odd jobs.  I cut and hammered in some support stakes along my waterline where the pvc pipe makes its way to the river from the pump.  This section of pipe lays on top of the ground and is not buried.  The river is capable of rising over 10 ft up to the river bank and beyond.  As the water rises the current gets stronger.   Now the pipe is secure against any strong currents when the river water flows over the pipe.  I also finally installed a lock on my bedroom loft door for additional security if I left home for a few days in the future.

I may have also brokered a bit of a peace treaty with Jill.  We got into a bit of an argument when she showed up at my door to return a debit card they were using of mine in the past.  We got into an argument about the electric bill.  But after the argument, I went over to her cabana and we had a talk.  I told her we would work out the electrical bill as soon as she took her name off a business license that I need in my name to continue running my house as an Airbnb in Belize.  I found out that jack stole my photos off an old laptop way back in 2010.  [Jill would end up never signing over my business license and in return we never came to an agreement on the electric bill and I had the account changed in my name in March and had their line removed my electric meter in April.]

January 24
Life in the jungle: Again, this morning I started my day at the ponds.  Except for the trees that need to be taken out by chainsaw the center mound is clean and ready for papaya trees whenever my seedlings get tall enough for transplanting.  I have also now started cleaning/chopping the far mound.  (There are 3 mounds.  The mounds were created by the excavator when he dug the ponds.  Two ponds were dug leaving 3 parallel mounds of dirt 300 ft long.)

The rest of the day was spent cleaning around the future fence lines that will surround the house.  I also planted about 40 more papaya seed bags.  Most of these planting was reusing seed bags that had not germinated from earlier planting.  I think I currently have 60+ papaya plants that have started growing.

It rained a bit today (on and off) but it was another full day.  I am pretty physically exhausted.

January 25
Life in the jungle:  Today was a trip to the city.  I finally paid my tourist taxes from December.  I than went to the Labor Department to attempt to sort out my work permit.  It sounds fairly complicated.

From there I was forced to buy a new phone and this stressed the heck out of me financially.  Every week I am spending more and more money.  My old phone will barely charge anymore.  The charging port is FUBR.  I can’t afford an iPhone anymore so I switched to an Android.   I never liked Android and attempting to move my apps (social media accounts) over to the new phone was a complete headache.

On the bus home right before my stop I seen what is called a Bush-dog or a Tayra (Eira barbara) run across the road from the bus.  It wasn’t a good look but it was the first one I have ever seen. 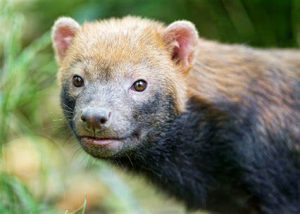 A Bush dog of Belize – random photo off the internet

After getting home I went to hardware store.  I am trying to find someone with an auger to help put my fence posts (for my fence line) in the ground.  The owner of the hardware store highly recommended a guy who didn’t have an auger but could do the job without an auger.  He basically lived next door to the hardware store so I biked over and did a meet and greet with Nery.. Nery said that he would stop by the farm tomorrow afternoon to survey job.  So, after a very long day this was a welcomed end of the day for me.  [Nery would end up becoming a pretty good ally in the future.]

Heath my Airbnb guest called me out of bed tonight because there was a scorpion on his bedroom wall. 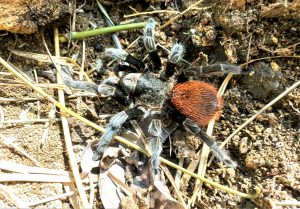