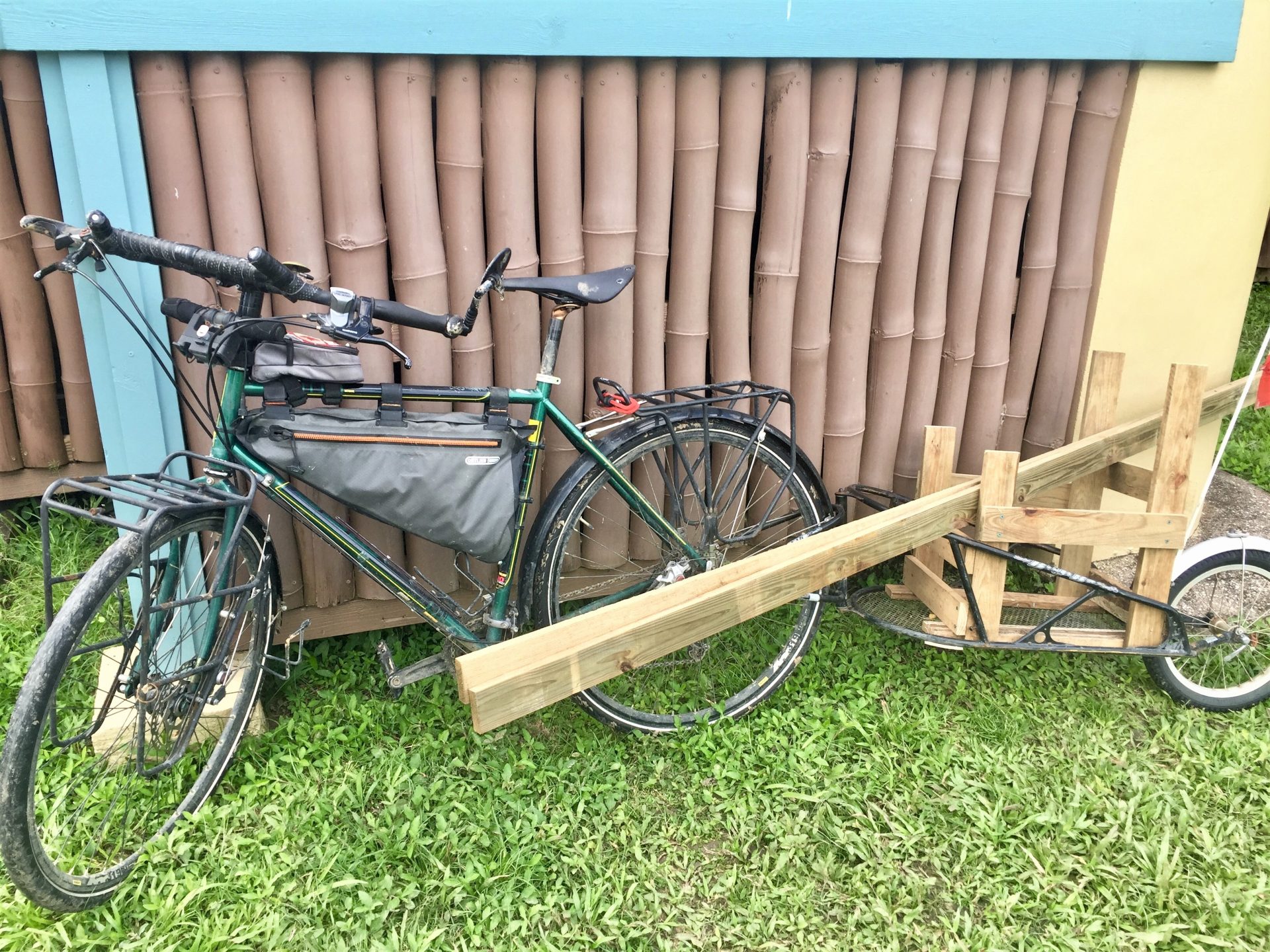 December 26
Life in the jungle: I am still sick.  This sucks, I can’t even remember the last time I was sick longer than a day.  I have too much to do and no energy.  I had some noodle soup for breakfast to get something into me and then I decided to tackle my back deck project.  Some screws had rusted and snapped and some boards had warped into a crown.  It was a job that needed to be done sooner or later and didn’t take too much physical effort. 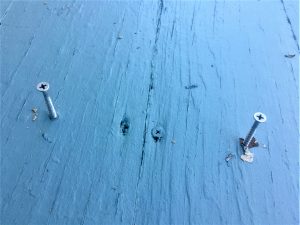 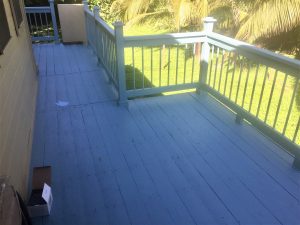 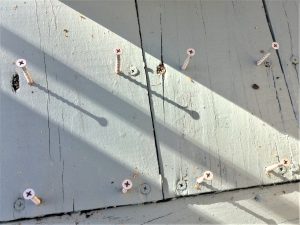 The job required me to pre-drill a hole, hand start the screw and then power the screw the rest of the way with the drill.  I found after a while that while I feel weak but I don’t feel too sick anymore.  So hopefully I am on the road to recovery.  I was able to but in a full day slow and steady.  Few jobs will remind you how old you are until you have to bend over, pre-drill, hand start and then power drill a few hundred screws.  I don’t know how many screws I went through but I used about 3 lbs of a 5 lbs box.  Which is a lot of screws. Not to mention a whole load of new blisters all over my fingers from hand starting the screws.  I finished the job just before dark. 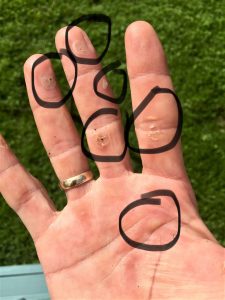 By bedtime I was feeling like 85% better.  I am not setting my alarm again for tomorrow but I expect to be my normal self again.  It’s been a very long time since I was under the weather.  Let alone for more than a day.

Life in the jungle: Last night I had what can only be described as a nightmare.  Belize Customs showed up in a dream and they were going to kick me out of the country because they believed that I had taken a ride on a fishing boat and that was considered dangerous (as crazy as that sounds).  But that’s the thing about dreams.  You have no control with what happens in them or how you respond inside of the dreams.

I woke up feeling pretty rough physically but that is fairly normal for me mornings.  Everyday I push myself physically to exhaustion and every morning I feel it until I am up and about.  My hands are pretty sore from a slew of new blisters.

Today I spent the day working and building multiple projects at once.  I cut the wood for my bedroom door, I then cut the legs for a work table I am building and then I built a frame that fits inside my bike trailer to allow me to pick up a few pieces of lumber when needed from the hardware store down the road. 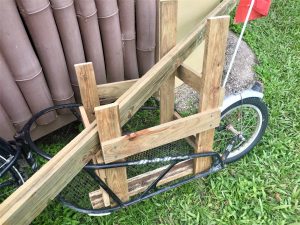 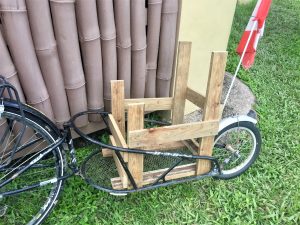 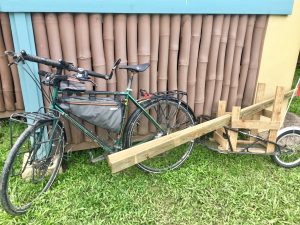 After finishing my trailer modifications, I headed to the grocery store to pick up some supplies only to discover that the store was closed for a public holiday?  So, my afternoon was wasted.

December 28
Life in the jungle: I didn’t set my alarm again last night.  While I felt fine all day yesterday I still feel off balanced in the mornings.  I ended up wasting my morning setting up the power washer to start washing my roof only to discover that the pressure washer motor is burned out.  Now the roof has to be washed by hand.  Which I started to do. 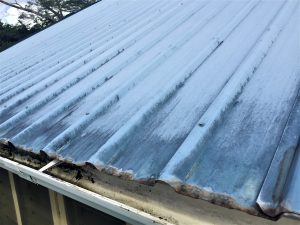 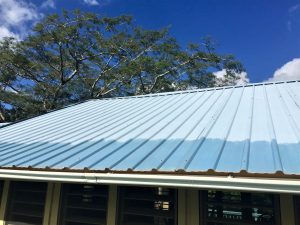 I took a break for a very late breakfast.  For some reason I have not bounced into my day as well as I did yesterday and I am exhausted.  I headed to the hardware store and tried out my trailer mortification to carry lumber and was able to carry 2 8ft 1×6 without too much difficulty.  So, success.

After I cut my lumber up, I went back to washing my roof.  Only now I am on the opposite side.  I took a heavy-duty rope and tossed it over the roof.  One end of the rope is tied off to the deck (on the other side of the house) and the other end of the rope is wrapped around my arm so that I can walk up the steep(ish) pitch roof and in one hand a mop and the other hand a garden hose.  Pretty much in the same moment that I sprayed the roof was the same moment the water ran down the roof which was the same moment my feet slipped from underneath me and I did a face plant into my roof.  Thank goodness I had the rope twisted around my arm and not holding it in my hand.  What grief. 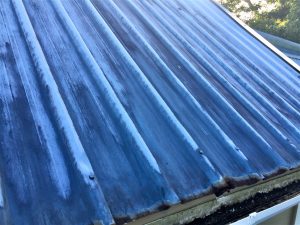 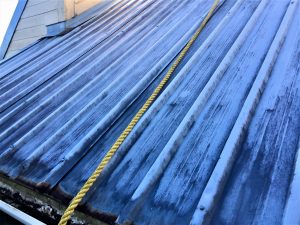 The other side was dirtier

I often have a sense of ‘who am I trying to fool’ with everything I am trying to do.  It’s a pipe dream and it’s only a mater of time before it’s all gone.  I work all day as could be argued that most people do.  The difference is that most people have a pay check at the end of the day.  I don’t and it’s hard to picture me ever having a pay check in the country of make-belief opportunities.  And then every 30 days I have to face Belize Customs.  And imagined fears or not they have the power to take all that is mine away and I have no one who has my back to protect my assets.  And I live in a country where virtually everyone would be more than happy to thief everything I have before you can even blink an eye. 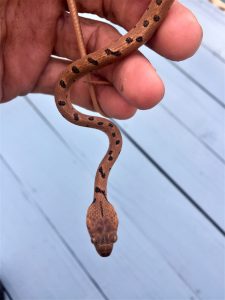 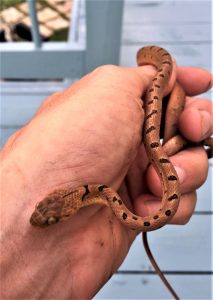 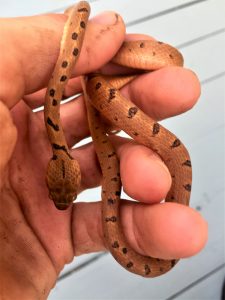 A juvenile Cat Eyed snake that I found this morning

December 29
Life in the jungle: A long time bike follower called me last night just as I was about to go to bed.  That made for a late night. So, I didn’t set my alarm.  When I finally got my act into gear this morning, I finished cleaning the section of roof that I was cleaning yesterday.  Now that that’s done, I am done with roof washing even though a few gutters should be cleaned.

I called my lawyer as I hadn’t heard from him or gotten a reply to my December 21 email regarding my residency status from my application started 3 years ago.  He said he replied by email (which I never received) but he was able to forward the email right away to my other email address.  Basically, just as I feared.  He had neglected my file for so long that I need to start over.  Except his words where government policy had changed considerably.   Who cares that he took my money?  I went to a Belize Facebook group looking for lawyer recommendations hoping many people would recommend I do this by myself.   No one recommended any lawyers and everyone recommended I do this myself.

So on a positive note to my day, I am feeling confident about this move.  The lawyer I have been using for years is a mutual lawyer through my ex-property manager Jack who when threatened war on me said good luck getting your residency now that we are at war.  I have no suspicion that the lawyer’s advice to start over is a result of that threat.  I was 99% sure before I even arrived in Belize I would be getting that response.  But the good news is that doing my residency on my own releases any nagging fear of any fishy business if he was still my lawyer.  I only have one other main business dealing with this lawyer and that deal is 95% complete with no more payouts.

So, I am upbeat about all this.  But it has been a stressful week.  It’s amazing how much energy I had for a solid month when I arrived home and then have a bunch of stuff come crashing down on me and get sick.  It has been very physically and mentally draining.