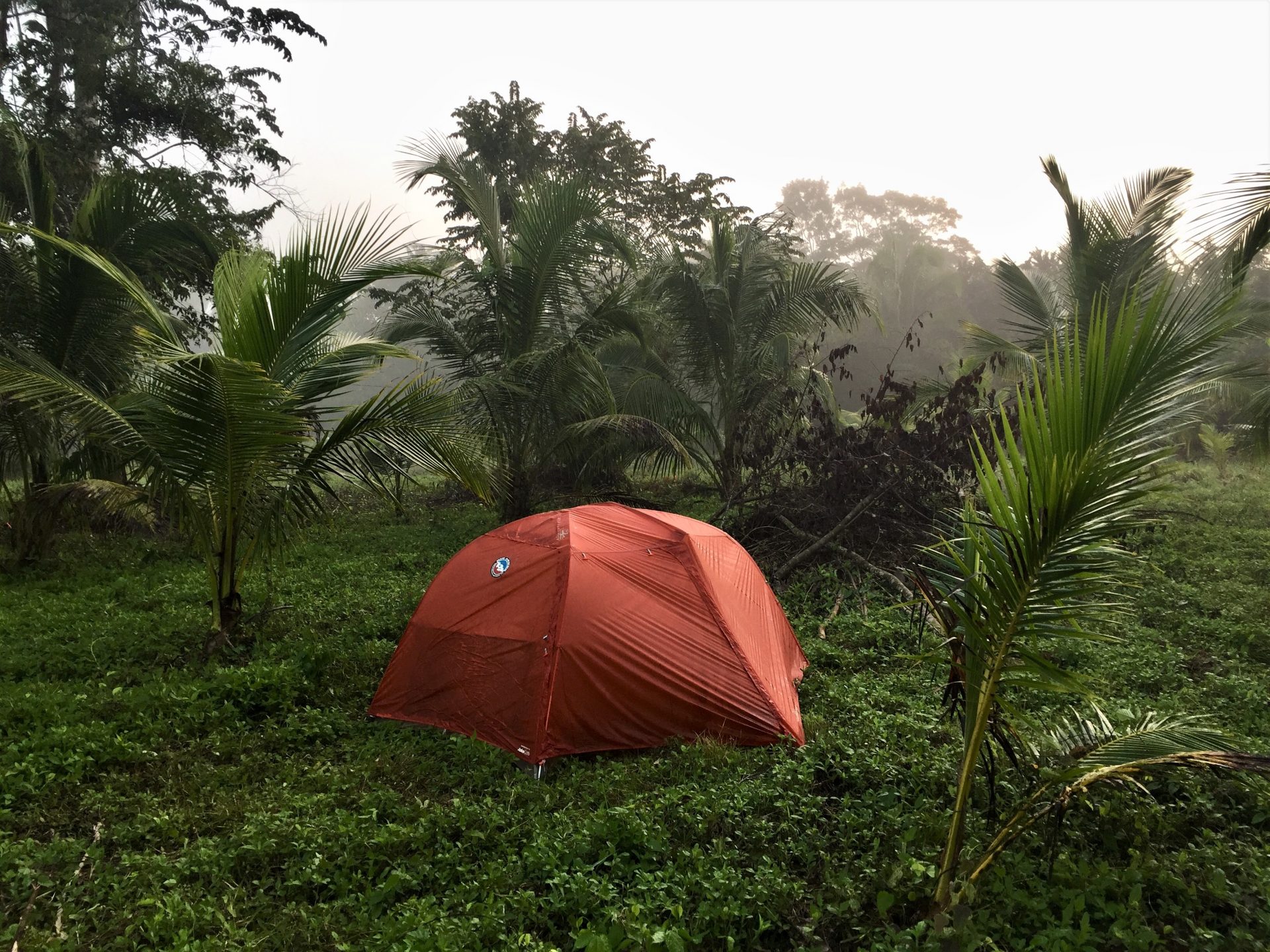 December 20
Life in the jungle: I slept in and then spent the morning finishing my housework and packing some supplies to exit the house until the 24th for some Airbnb guests from Holland that arrive today.

In the afternoon I remembered and found out I was not thinking when it came to two dates.  First, I remembered that I completely forgot about having to get my passport stamped.  So, I have to go to the city for that tomorrow.  Luckily, I remembered that when I did.  And secondly, my guests don’t come until tomorrow.  Which is a good thing because I get to sleep in my bed tonight and the house is already clean for when I go to the city tomorrow.  It also gives the road an extra day to dry out.  I have been informed that the guests do not have 4×4.  This could still be interesting.

This afternoon I did some chopping along the coconut field/road fence line.  Cleaning along the fence is exposing a fence line that is going to need all the old barbed wire pulled out and re-wired.

December 21
Life in the jungle: This morning I went into the city for a passport stamp.  What a gong show.  If I hadn’t sat through it, I would not have believed it. The passport stamp cost me $100 USD up from $50 USD in 2010 for 30 days in Belize.  Mexico was $35 USD for 6 months.  This morning it took 35 minutes with no line up (I was the only person they were serving) to get my passport stamped.

I also hit the bank and went back to the cell phone/internet provider – DigiCell.  They still have no equipment to hook me up with internet on the farm.  I purchased some tools, replacing tools that have disappeared over the last 3 years of my absence.

In the afternoon I met my guests at the bus stop just as they arrived.  They made it down my road without too much difficulty.  It’s a Dutch family, they have 2 fairly young children along with an adult child from the wife.  In less than 4 minutes of their arrival the little kids had my house in a complete mess.  I never seen such a quick transition in my entire life.  From a spotlessly clean and organized house to a total mess.  So be it, tonight I am sleeping in my tent. 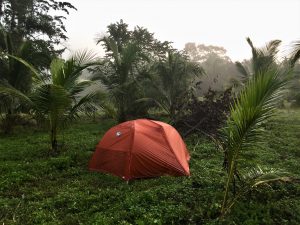 December 22
Life in the jungle: Most of my day was spent working a fence line that parallels our road.  The barbed wire is all busted up and most posts are broken.  The fence line has to be rebuilt.

I got an email from Jack (my now ex property manager) asking me to pay Jill $160 BZ ($80 USD) for like 2-3 hours of plumbing work he did for me just before he left for Canada.  I asked him to explain the charge as it seemed pretty high to me. His email response was the following:

“If you haven’t paid Jill the $80 by tomorrow, I will take a different route to collect.  Have fun trying to get residency (in Belize) or getting something fixed when it breaks.  You just started a war you won’t win.” 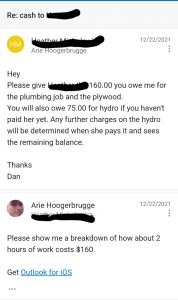 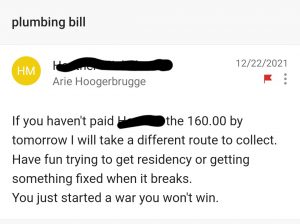 I can’t make this up if I tried

All I can say is that is a pretty bizarre response to a simple inquiry of please explain the $80 charge.  Not to mention that I just spent $3,000 USD repairing our road without him contributing a penny and I have been yelled at and insulted by the wife and now had the husband declare war against me over an $80 bill.  Who charges someone $80 after $3,000 was just paid out so his 74-year-old wife can get driven up and down the road with her groceries instead of walking?

Reflecting on the past month.  Fixing the road, two Airbnb guests and Jack flying back to Canada a month sooner than expected.  Plus, Jack and Jill’s drama I have to say my arrival time to Belize was nothing short of perfect timing.

December 23
Life in the jungle: An exhausting day of chopping with my machete.  My guests unexpected left today a day early.  Apparently, their adult daughter was so terrified of snakes she refused to leave the house.  Also, she had to catch a flight back to Holland tomorrow morning and they were scared for the road even though the road is nice and dry.  In a way it worked out great for me as I am not sleeping in my tent tonight but still getting paid.  I spent most of the rest of the day cleaning my house and reorganizing myself back into the house.

I ended up getting into 2 arguments with Jill.  One moment she would be this sweet lady and the next moment she was cursing me out.  It was the most extreme example of Jekyll and Hyde I had ever experienced.  It was actually causing me to wonder about her mental capacities and the onset of some form of dementia.

I biked up to the grocery store for some groceries.  I stopped in the village for some beers.  I really needed a few beers after the last few days.  Some inquiries revealed that Jill’s Jekyll and Hyde personality was because she was drunk and stoned.  And that if I was smart, I should assume that she is always drunk and stoned.  Great, now I have to deal with a 74-year-old woman is I need to consider drunk and stoned all the time!

I ended up having 5 beers and biked home down our road in the pitch-black darkness.  I only fell once.

December 24
Life in the jungle: I woke up in the middle of the night and knew waking up at 5:30 am would be a big mistake.  So, I reset my alarm and I woke up at 6:30 am but I am feeling pretty beat up.  It was very cold this morning.

I managed to get a few hours of chopping in the coconut field.  Arriving back at the house I collapsed into my hammock and did not move for many hours.  Never has 5 beers ever taken me of commission like this.  Jill informed me in her drunk and high state that her and Jack were getting a divorce.  And then she stormed off calling me an ass-hole. (I could only wish that was true.)

Later in the afternoon I attempted to get a little work done.  Jill caught me in my yard and was in a far more pleasant mood.  I felt I had no other choice but to listen politely.  From the local advice I had received yesterday evening I mostly just politely nodded to her as to not trigger her Jekyll and Hyde personality.  And I felt if I could navigate the conversation without her swearing at me that would be a bonus test of my skills.  Only once did she come close freaking out on me. The biggest main problem was that I had to listen to the same 8-10 topics repeated multiple times over more than an hour of standing and nodding in agreement.  So much for getting anything accomplished this afternoon.

My body feels very achy.  I am sick but with any luck I will be fine tomorrow.  I am not setting my alarm because of how I feel.  It was probably the cold morning along with not being in the greatest of shape from last nights beers that is making me feel like I do.  The weather today was perfect with a cool evening.

December 25
Life in the jungle: I am still sick.  I think it’s just a cold.  My only symptoms are achy and slightly stuffed nose. I have sense of smell and taste.  I got very little done today.  But I planted 35 watermelon seeds, about a dozen orange seeds and 4 plums seed.

I had no more energy.  It sucks being sick.  I have so much work to do.  Last year for Christmas I biked from Berkley to San Francisco over the Golden Gate Bridge in the rain all day.  It was one of the only rainy days since northern California and I would not experience rain again for almost 7 months when I arrived in Copper Canyon Mexico.