‘Safari Arie’ is the new Man in Motion

In this time of fear and isolation, it is nice to hear of someone who beats the odds.

OTTAWA—Arie Hoogerbrugge is a man on a mission. Two missions, in fact: fi rst, ride his bicycle to Tuktoyaktuk in the Arctic Circle, and then to the southern tip of Argentina, for a total of 55,000 kilometres. And once that’s done, he intends to plant one million trees. Not unlike Rick Hansen’s tour of the world in a wheelchair in the 1990s, he is a man in motion.The bike riding part sounds daunting enough, but consider this: he left St. John’s, N.L., in late November and continued through the winter. He spent most of De-cember crossing Newfoundland, then on to Nova Scotia and Prince Edward Island for Christmas. Then New Brunswick and Que-bec, before arriving in Ottawa on March 12. He has faced withering snowstorms, freezing rain, and heavy headwinds over his 4,560 kilometre journey. 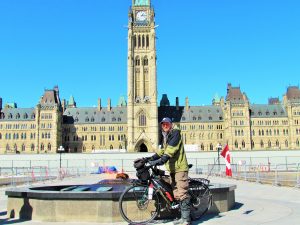