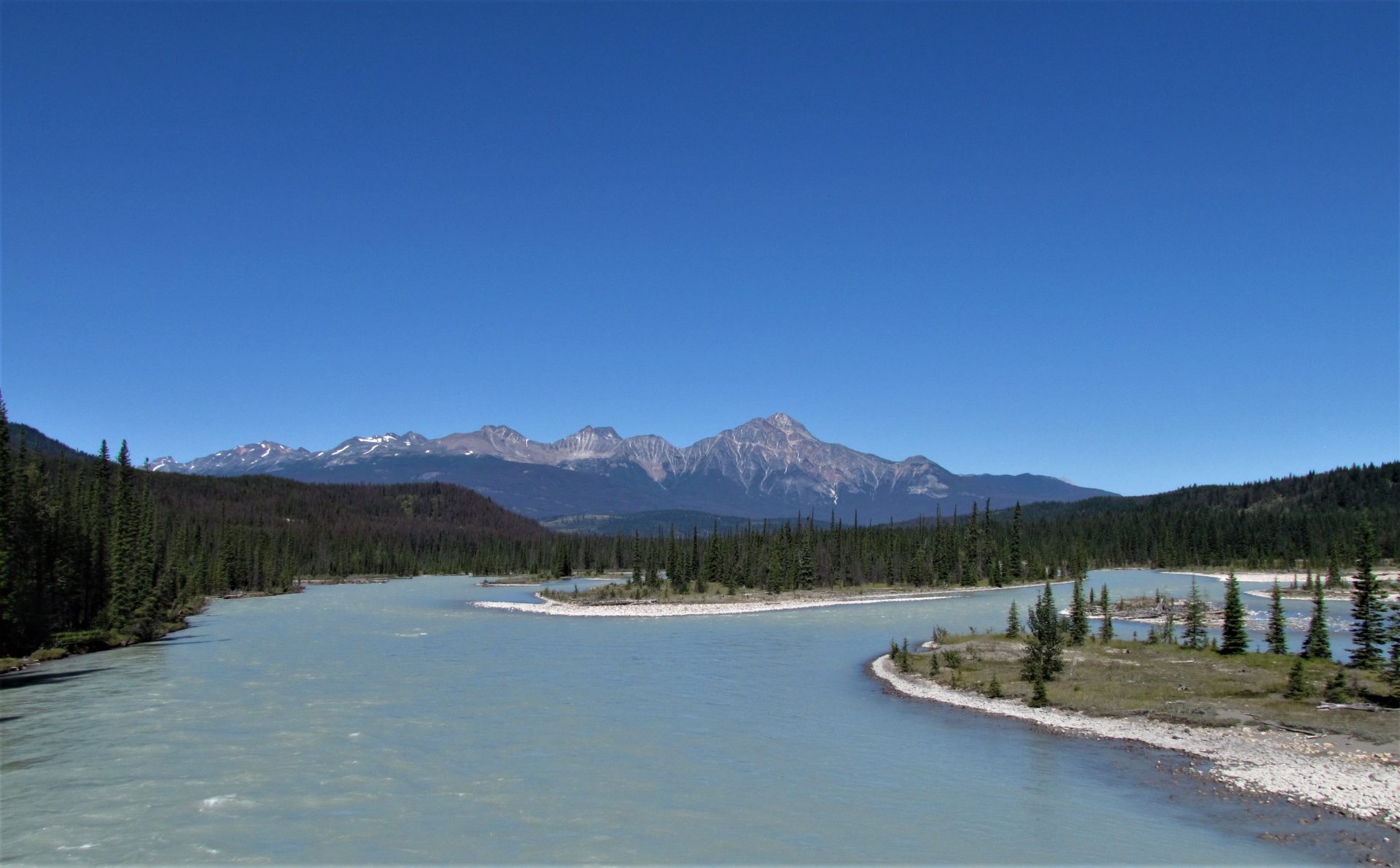 Some Notes – Another beautiful sunny day.  On the way to Jasper I visited, Sunwapta Falls, Athabasca Falls. 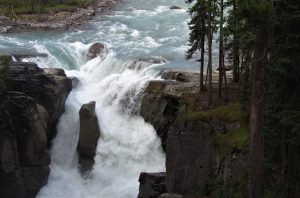 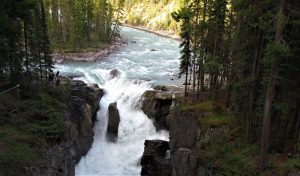 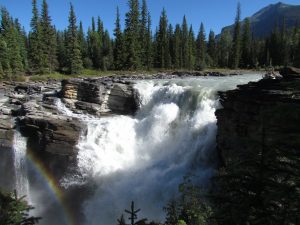 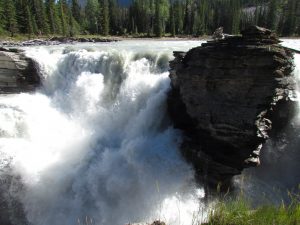 I am staying at the Downtown Hostel at $49 a night plus taxes.  I booked Sunday and Monday night.  I hadn’t had a shower since Calgary and needed to charge my batteries and of course I am always 100 hours behind in my work.  If it wasn’t summer busy season and post covid-19 booking restrictions I am pretty sure I would never spend that per night.  In fact I know I wouldn’t. 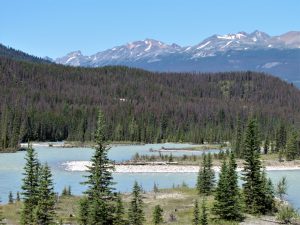 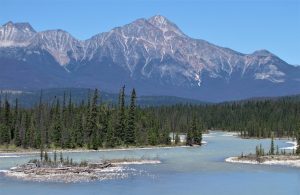 Athabaska River coming into the town of Jasper

I had some exceptionally amazing experiences this afternoon and evening.

So this is a pretty cool story.  Ha Phan reached out to me on May 24 about her bike ride across Canada.  On June 15 Ha left Toronto headed to Vancouver.  Since then we have remained in contact with me feeding her intel on the road ahead of her.

When Ha left Toronto I was way head of her in Nipigon ON (approx. 1,200 km’s down the road).  While I was taking the back roads to Dinosaur Provincial Park in Alberta Ha actually passed a head of me.  But I was able to catch up to her in Jasper this afternoon due to the time she spent hiking between Banff and Jasper.

Tomorrow morning she is off towards Vancouver so she can complete this section of Canada and catch a flight back to Toronto to bike east to complete her cross Canada bike tour.

To add to the story Ha has basically been bikepacking with the minimalist of equipment and supplies (which is crazy and a testament to her determination).  We went out to dinner and it was cool to finally meet and swap stories of the road. 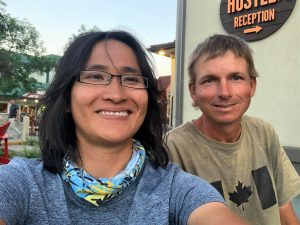 A second really cool story.  After finally getting down to work on my computer in the evening.  Two guys knocked on the front window of the hostel I am staying at.  (The main waiting/hang-out area of the downtown hostel is on the main floor and has windows all around with the sidewalk right in front.)

It was kind of funny because they were wearing masks (as everyone is).  Anyways one of them holds up a phone and on the screen it has the following typed – “Safari Arie?”

Anthony Giardetti and Chris Townsend have been following my ride from basically the beginning.  Currently they are riding from Calgary to Vancouver.  They discovered I was in Jasper from my Strava bike ride app update and saw my bike and then saw me working a way through the window.  (*A side note I can be found on Strava at Arie Hoogerbrugge) 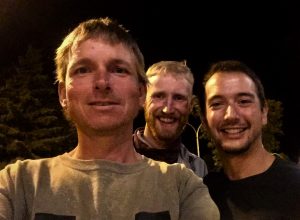 A very full day resulting in not a lot getting done but some amazing connections and meetings. 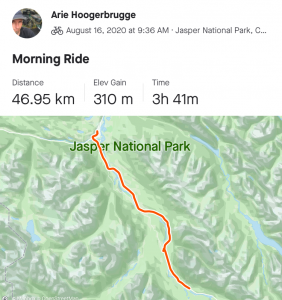 August 17
Some Notes – A largely uneventful day.  I sat in front of the computer all day long.  Mostly editing photos as the internet speed is slow here.

August 18
Some Notes – A beautiful sunny day.  Bruce picked me up this morning and we made our way to McBride.  We made a few stops along the way and stopped at Mount Robson.  Mount Robson’s elevation is 12,972 ft high making it the highest point in the Canadian Rockies. 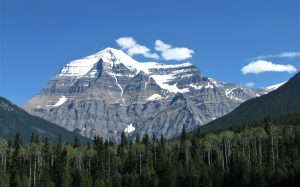 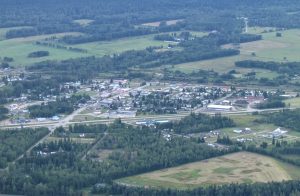 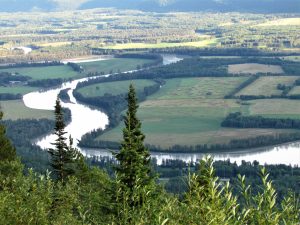 McBride from high up

August 19
Some Notes – A beautiful sunny day.  We drove out and went to the Ancient Forests an hour down the road.  It was amazing to go.  The trees are 1,000 to 1,500 possibly 2,000 years old.  The trees are not as tall as most of the old giants along the coast because of strong winds tend to snap the tops off these trees.  This forest would also be the most “inland” temperate rainforest as most are found along coastlines. 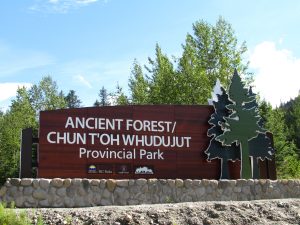 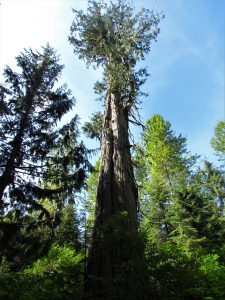 Bruce was the one to tell me about this forest.  I had no idea of its existence before Bruce brought it to my attention.  And then with my routing changing I did not anticipate visiting there.  I am so thankful to Bruce for reaching out and bringing me all this way out of his way. 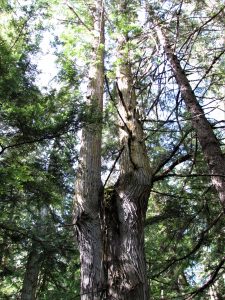 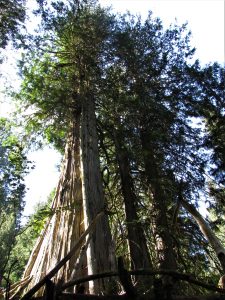 August 20
Some Notes – Today was a pretty laid back day.  I continue to work on documentation when the opportunity presents it self.  I did a local newspaper interview with Andrea from The Rocky Mountain Goat.  I also went out with Bruce’s roommate Sandy so see 2 local waterfalls. 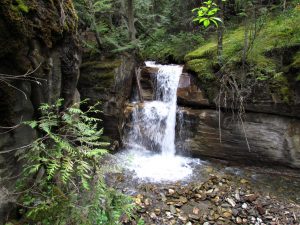 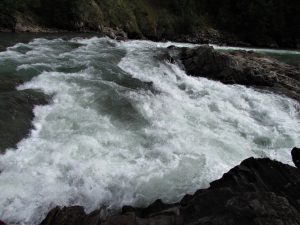 Some Notes – I woke up super early at 6:30 am this morning.  Bruce offered to take me as far as Lake Louise this morning.  He is meeting with family in Jasper later in the afternoon.

Today was overcast and cloudy day so it wasn’t like I was going to miss too many photos.

We made it to the Lake Louise/TransCanada turn off by 1 pm. 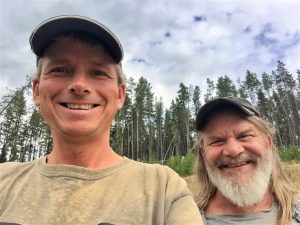 I so appreciated Bruce for everything he did

Between picking me in Jasper and taking me back and then taking me to the Ancient Forests and back and then to Lake Louise and then back to Jasper to meet family; Bruce drove at least 1,160 km’s this past week for me.  I had an awesome time with him.

Getting to the BC border was a headwind and some light spitting rain.  The rain never lasted and fortunately the temperatures were pretty good. 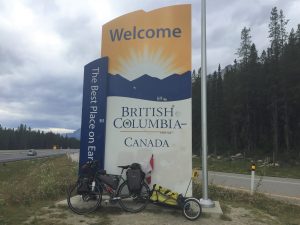 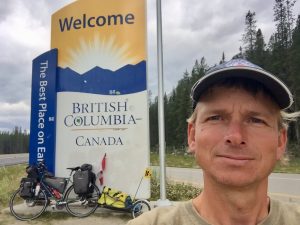 Alberta was a very busy province for me.  I seen and visited a lot of places.  More than usual and I feel like I took a record number of photos.

The landscape change considerably from east to west.  Starting in scrub prairie and then the badlands to deep in the Rockies.  From Hoodoos to glaciers.

Pretty much everything about Alberta was amazing.

I pedalled 1,057 km’s across Alberta which is pretty straight forward if you plan to visit Jasper National Park.  Technically I had planned an additional 230 km’s back to Lake Louise from Jasper that I did not have to pedal thanks to Bruce.

I had an extended stay in Calgary to get my bike rear hub and trailer wheel fixed.  I had 5 hosts (including Bruce in BC) and I stayed in the hostel in Jasper.  Not including my time in McBride with Bruce I was in Alberta 23 days, but biking 14 of those days.