What Happened To This Ride?? 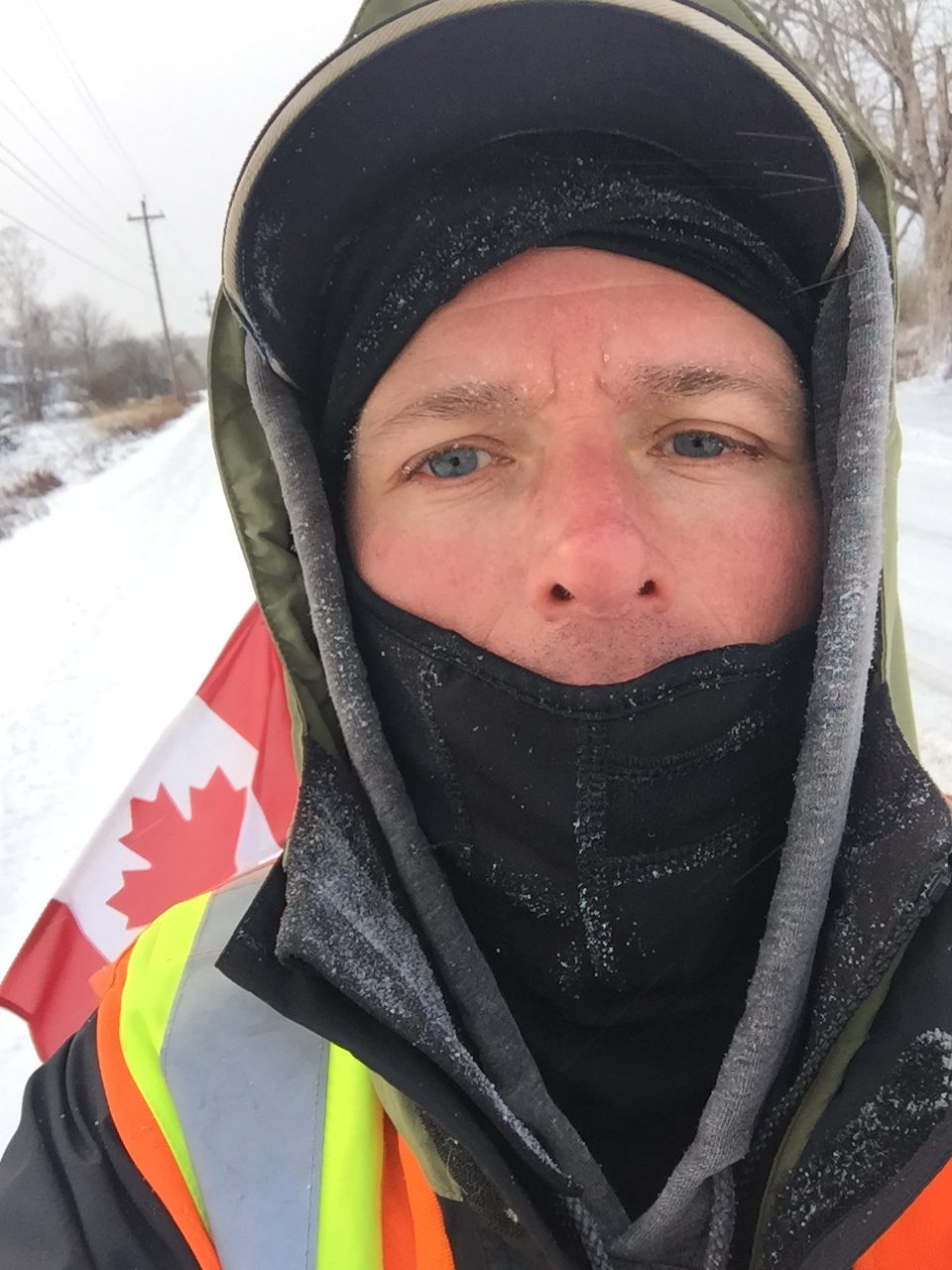 What is going on with this ride?

This ride has evolved into something I could never have imagined.  Slowly at first.  Give me a break I am pedaling 185 lbs of bike and gear. (LOL).  Anyways, like I said – slowly at first.  Crossing Newfoundland along the TransCanada Highways limits your interactions with the locals due to the fact that most Newfoundlers live off the TransCanada.  But I had 3 really cool interactions.

Arriving in Nova Scotia I was hosted by people from my past.  And then when I got west of the Canso Causeway I was hosted a few times by people that had been following my ride from basically the beginning.  And then when I got onto Prince Edward Island the momentum really started to move this ride into a direction I could not have ever anticipated.

On the island complete strangers started messaging me with a place to stay for the night.  Restaurants started giving me complementary meals.  People were waving down their driveways and I was starting to get recognized almost everywhere I went.  Some of this made some sense because of how small PEi actually is.

While on and pedaling through PEI I would end up adding at least 1,300 additional kilometers to my Atlantic Canada routes and I would also adopt a new approach to my ride that involved me saying “yes” to virtually all requests and invitations from locals along my ride as long as the request or offer did not take me horribly far off my planned routes.

Getting back in Nova Scotia to complete the second and final half of this province I had actually expected things to slow down and quiet down regarding invitations and recognition.  I figured my route along the Bay of Fundy was too isolated for any of the locals to know about me.  Nothing could be further from the truth.

The generosity and recognition literally went into overdrive.  Many of the acts of kindness and words received are still hard for me to process.  I suspect that I will need the next 20,000+ km’s of pedaling just to scratch the surface of processing where this ride is taking me.  Nova Scotia along with all of Atlantic Canada has turned this journey and story into something that I could never have anticipated or hoped for.

Interestingly enough I received a very interesting comment to a Facebook post just the other day.  The comment was respectful and respected.  What he had to say was true and what I had very much expected my ride to be about.  Admittedly I was surprised that he was not equally pleased at how the ride had evolved.  Regardless his comments were respectful.  But what was even more amazing was the few people that happened to see the comment and responded.  All response comments were equally respectful.

One thing was for sure.  I had to convert this conversation into a blog post because of the weight and kindness of these comments not to mention this post will help others that have not met me personally  to understand better how this ride is evolving.

The following is the original comment.  His name has been omitted from this post as it is not necessary and at the same time the comment respectfully explains what the belief and path that this ride was originally going to take and where he felt that the ride had evolved into.  In my response you will see that I don’t exactly agree with his interpretation.  But at the end of the day interpretation is personal.

Don’t get me wrong Arie.  I’m so happy that you are receiving all the support and attention that you are getting.  But when I first began following you, it was because I admired the courage and bravery that you were taking on and looking forward to the struggle and adventure and.. “man against nature ” sort of mentality that this trip was promising..

It just seems to me that it has kind of become more of a social event here lately.. I will continue to follow you closely.. but gonna have to back off a little at least until your journey once again becomes more of a competitive, man against nature and himself sort of thing …
Till then..
Keep peddling Arie!

The ride evolved into something much bigger than me.  But it’s far from a “social event.”

It has become something magical where people across provinces are reaching out to be a part of story and journey.

To force myself or an agenda into something that was or was not meant to be would be to sabotage a far bigger and better story that I could ever write or hope for.

And you are always welcome to join me in my tent during those -14c nights.

Responses from some of my followers

Some minor editing may appear from grammatical correctness/clarity]

Christine Gulliver-Gamble – exactly, we all want to be part of your story. l am so glad l got to meet you.  People love you Arie. Your story is magical. Stay safe.

My Brother – Jason Hoogerbrugge – I am one of Arie’s brothers.  Arie and I have spent countless hours talking about this adventure of his over the past couple of years.  I believe the story you are looking for, is the same one Arie thought he would have.  And I think this ride will include much of that.

His first ride, which inspired this one, was full of that.  That being said, I am happily surprised at the direction this ride has taken.  For a guy that has spent a lot of his life as a single guy (person), on the lower end of social interaction.  This must be quite an experience.  I think it’s great for him and I love seeing the coming together of all the “strangers” that have had a chance to meet him and offer their support in whichever fashion they do.

I like seeing how it offers these people an insight into an adventure they may or may not have ever thought about themselves.  I hope people can see how amazing People/Maritimers/ Canadians are.  I think these “strangers “(new friends) are just as much part of the story as Arie.  So I am following his ride in support of my brother but also in support of the role these great people get to have in this journey of his.

I hope as many people as possible get to take away something positive/fulfilling from one persons idea of an adventure across this land.  For some people an adventure like Arie’s bike ride can be huge.  But so can reaching out and offering to host a complete stranger with a warm bed, meal, shower etc.  Furthermore, accepting a complete strangers hospitality can be very challenging for some people as well.  This one part of this adventure that I admire.

Thank you for following my brothers ride and I hope you get to see more of what you we’re hoping/anticipating to see.

Sharon Goodridge-Redden – As one of Arie’s hosts in Newport Corner Nova Scotia, I was honored to meet Arie.  He is a very respectful, humble person on a once in a lifetime journey.  I am sure any of you who have hosted him will agree!

We very much enjoyed Arie’s company and getting to know him during his short visit to our home and I can only hope Arie also enjoyed visiting us.

I understand where you are coming from but from one human to another, I think it is very human to offer a warm bed, a hot shower and hot food to someone who is cycling all day long by himself, through frigid below zero temperatures, icy roads, snow storms and freezing rain.

I agree with Arie, it is something more and I commend him for adjusting to the situation.

Does he have to freeze and be alone every single day to make this journey successful? No, I think not.

Kelly Arsenault Richard – I was also very honored to meet Arie and be one of his hosts while he was on PEI. His humility, humbleness, fearlessness and grateful way is what impressed me the most about Arie.  What is happening to him on this ride is life changing not only to him but to those of us who are fortunate enough to meet him along the way.  Ride on friend and keep smiling! Looks good on you.

Jason sounds like a great brother and does have a great way with words!!

Alasdair Veitch – Arie – before you started, you had people – experts in their own minds – tell you that you were crazy to think about cycling across Canada starting in November.  I remember those posts, as do you.  Yet, here you are in February making it look like FUN and daily telling us of the kindness and help you have received.  But, you have still cycled through some gnarly conditions – like the day you arrived here!  You have shown the naysayers that it can be done, and with some nights of comfort thanks to those that help out!  Your ride doesn’t have to be daily misery, despite some wishing it to be so!  Rock on dude!!

Annie Ferguson – There are so many painful stories circulating in the news that it is uplifting to hear of your adventures Arie.  I will follow you along the way and pray you continue to benefit from peoples kindness.

Monique Gaudet – We are currently hosting Arie this weekend, I’ve been following his adventure since early December and wished that I could meet him, and imagined how awesome it would be to host him and learn about his tenacity.  Well, wishes sometimes come true, the stars aligned and he is with us this weekend.  I feel honored to experience Arie Hoogerbrugge. Wow! And this adventure of his is really just beginning.

And lastly from my Aunt Henny Hoogerbrugge – I don’t share much of my nephews journey on my timeline but I am this one simply because it reminds me of how life can take strange and wonderful twists reminding me to go with the flow of life rather than set the agenda.  [From these comments you will] get the full sense of what is going on here — not only to Arie, but to all those beautiful people he’s meeting along the way.

I anticipated every minute of every mile of every day and every night to be miserable and quite literally suck.  God had other plans.

Three years of your life