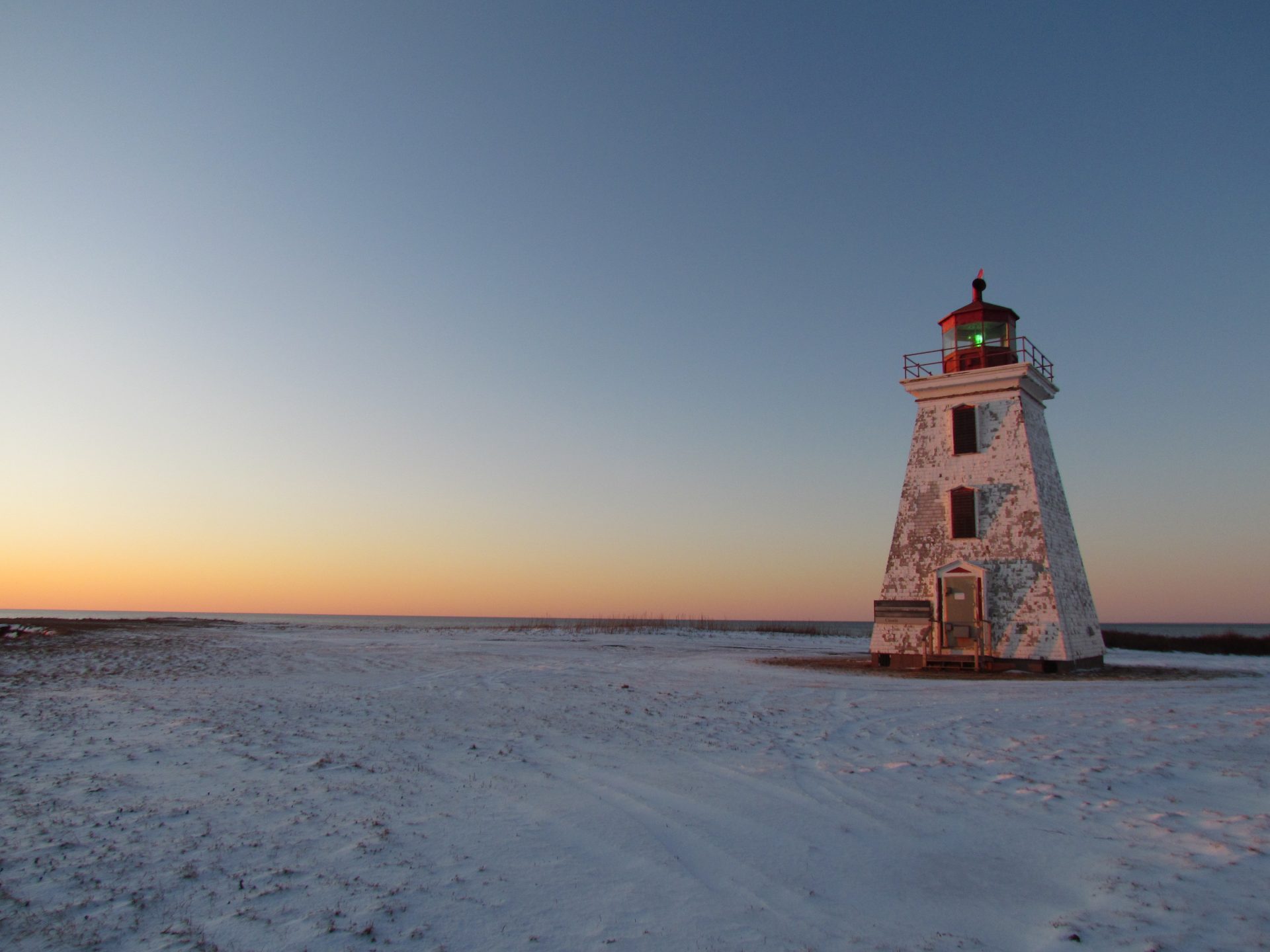 I couldn’t sleep last night if I tried so I slept in for a bit.  But the shed saved me real good from the elements.  Photographed the 3 lighthouses in Summerside and than just pedaled westward. 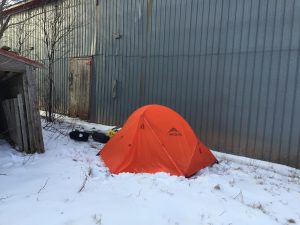 January 2
Pedal: 34 km’s
Destination: Tignish
Weather: Today was slightly below freezing and very little wind.  I woke up in my sleeping bag not wanting to get out.  Not because it was cold but because it was nice to wake up in my sleeping bag and I simply just wanted to enjoy the moment.  Last night I set up my tent between two barns across the street from the Tim Horton’s in O’Leary.

I eventually did get out of my sleeping bag and break camp.  Just as I was about move west my phone rang.  It was CBC Charlottetown.  The timing could not have been more perfect as I just asked Sean from CBC to call me back in 5 minutes.  Just enough time to get to the Tims and get myself settled.

I ended up doing a 45 minute interview that I felt went real well.  Imagine my surprise when half way through the interview Irene MacIsaac walks in.  I swear this province is tiny. 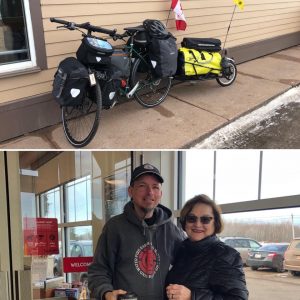 Because of my real late start I only made it as far as Tignish which was great because Irene set me up with her niece Brenda and her partner Michelle.  While getting my meal in Tignish a local handed me a $20.

I had very enjoyable evening with Brenda and Michelle.  Michelle fairly new to the island (originally from Prince Rupert BC) worked administration at the local fish plant.  I learned all about the health of the lobster industry.  Brenda told me about her family heritage and how connected to the community her family was. 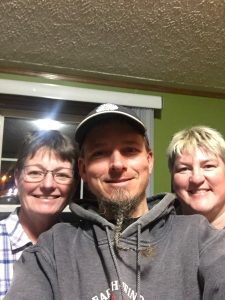 January 3
Pedal:  50 km’s
Destination: Stompin Tom Centre, Skinner Pond
Weather: overcast and right at about freezing with very little wind.  Considering that this part of the island is known for its wind I think I was pretty lucky.  Temperatures are seasonably high.

Brenda took my 2 doors down to visit her brothers home.  Her brother has a pretty cool home.  Joey has designed and incorporated blue bottles into his fences.  He has also created lawn ornaments out of blue bottles.  The inside of his home is customized with stone floors that he custom cut and collected from the PEI shoreline.  A very unique home and property.  Brenda then gave me a tour of St Simon & St Jude Catholic Church. 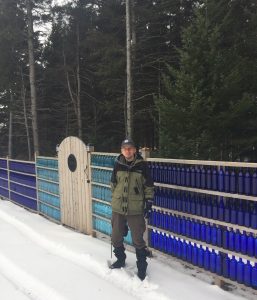 Thank you so much Brenda for taking the time out of your day.  A huge reminder to always to advantage of any kind of interaction with the locals.

I ended up making a loop from one shoreline to the other and back to Tignish to grab something to eat.  I spent a little time on the laptop and then head to Stompin Tom Centre to see if I could find a place to camp for the night.

Getting at the local diner in Tignish I open my phone to discover an internet article done by CBC had been posted.  That was super cool to see and I felt they did a good job on it. 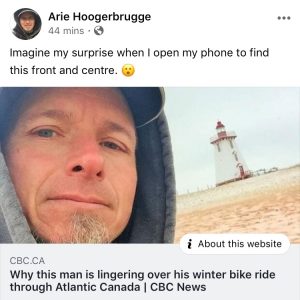 I am forever amazed at how amazingly interesting and awesome my interactions have been with so many different people since I started this ride. 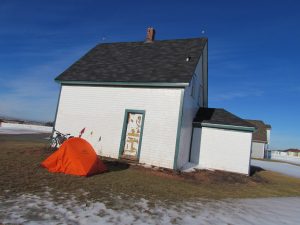 There was a text message waiting on my phone from Brenda offering to bring me breakfast and fresh water to me.  I let her know I was doing good for food and that I had totally slept in.

You can imagine my surprise when I found a restaurant open in Miminegash.  Real good cooking too.  I barely got down the road when Craig Costain waved me down his driveway.  He read all about me in the CBC internet article and offered me a hot chocolate.  Before long I was getting my photo taken with all sorts of people – Tommy Ellsworth, Owen Power, Alec Griffin, Sean D’Amato, Daniel D’Amato, Rodney Deagle and Nicole Ellsworth. 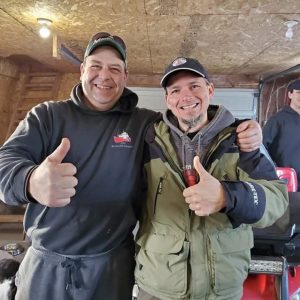 Before long it was going to be dark out and so it was decided I should spend the night.  A huge thank you to Carla Kelly & Craig Costain for giving me a warm bed and a huge thank you to Craig for waving my up his driveway.  Craig sang a few amazing/beautiful songs.  I am so glad I was able to meet everyone.  Barely 20 kilometers ridden today.

It was a cold day today, but fortunately I didn’t have far to go today.  I biked the West Cape and West Tip of PEI and made it to my cousin David and Heather Voortman in Glenwood.  I have to be honest, I was glad not to be sleeping outside tonight.  Very windy and cold. 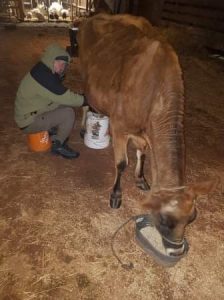 Milking a cow for the very first time

January 6
Taking a day to get caught up on blog and photo uploads. 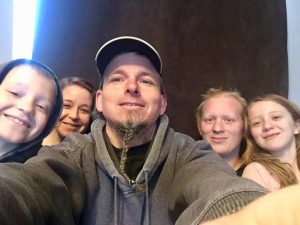 January 7
Pedal:  100 km’s
Destination: Summerside
Weather:  Today was sunny and nice but cold, luckily not much wind.  The temperature was at least -8 C  today.  Today my feet were even a bit cold.

I got a little bit of a late start today; I think about 11:00 am.  I at least wanted to get to the Cape Egmont Lighthouse.  I got there towards sunset which made for some nice photos.  I decided to push on and then when I came to the road that went straight to Wellington from the coast I took it.  It was now dark and there was food (restaurant) at the end of this road.  There was no point in hugging the coast in the dark. 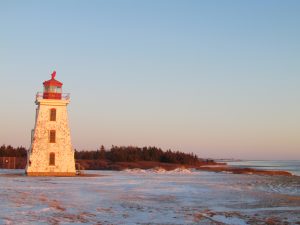 After  dinner I was motivated to make for Summerside even though it was well after dark.  During the day I received a  message from the Jeff Sammut Siriusxm radio show.  They want to interview my tomorrow afternoon.  So I wanted to ensure I was in Summerside for that.  It was a cold day today and I had that empty building that I spent New Year’s Eve in waiting for me.  I ran into Rob Trembley at the Atlantic Canada Superstore in Summerside.  I had met him only 2 days earlier when I met everyone in St Lawrence.  I tell you this island is small.

By the time I had reached the shed I needed to go to Tim Horton’s for a second super.  I am forever hungry all the time.  By the time I did reach the shed I had officially pedaled 100 km’s.

January 8
My feet were cold last night.  I took the day to work on the computer at the Starlite Diner (in front of my sleeping shed).    I had that interview later on and PEI got hit by a snow storm.  So all around it was a good decision and timing.  The radio interview went really well.  My first radio interview in my life. 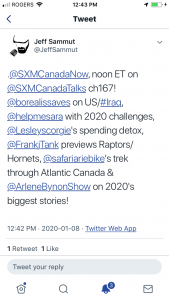 I also took a chance an messaged Joel Ingram of the Crisis to Crushin’ It Podcast.  We were able to schedule and whip that off as well.  I think that went for about 45 minutes.  I enjoyed that as well.

This morning even before my breakfast was served  I received a huge piece of the best tasting cake I ever had as gift from a customer at the diner. 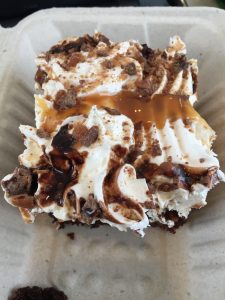 I ended up staying/working on my computer to all most 1 am at the Tim Hortons last night.  Causing me to sleep in until almost 11 am.  After lunch at the Starlite Diner I made my way to the Confederation Bridge.  I followed the coast and the winds were pretty brutal.  The roads were plowed from the snow storm the day before but at the same time still covered in snow.

Taking photos of the Confederation Bridge from afar was all it took to freeze my finger tips up pretty good.  I pedaled to the PEI Information Center to meet the woman who forwarded me the photo of me pedaling through that New Years Eve winter storm.  She had actually reached out and messaged me only 2 days earlier when she saw me on the side of the road that night in Wellington.  Anyways she said she would appreciate meeting me.

After saying hi and warming up I pedaled up to the Port Borden Back Range Lighthouse.  The winds were merciless and that short trip over to the lighthouse had me completely frozen.  I pedaled to the Tim Hortons to weigh my options for my bridge crossing. 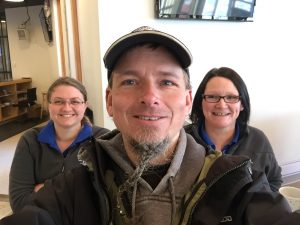 It was after 3:30 pm and I decided the smart move was to hang at Tims till night working on my laptop and then take a late shuttle that would allow me to sleep inside the shuttle waiting area on the New Brunswick side.

I had just grabbed my coffee and doesn’t Kelly from the Information Center walk in all worried about me because of how cold it was and invites me home to a warm bed.  In the moment I didn’t realize how brave this woman was being because at the time I didn’t realize that she was single inviting a strange man into her home so he could stay warm.

She lived all the way in Wellington so I pedaled my bike back to the Information Center where my bike would spend the night.  The evening was very pleasant and for the first time in front of a “stranger” I got a bit emotional telling my story about Steven. 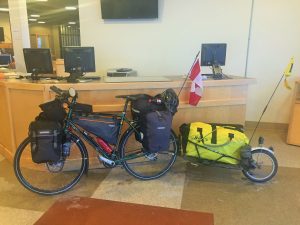 Parked at the PEI Information Center for the night

January 10
Pedal:  67 km’s
Destination: Aulac, New Brunswick
Weather:  Today was bitterly cold for the first part of the day and eventually warming up.  The winds were pretty intense and was a headwind all day.  After lunch there was some wet snow that eventually turned to light ice pellets.  The shuttle driver said the winds averaged 85 miles an hour but reached over 100 miles an hour at times yesterday.

Prince Edward Island is officially finished.  What an amazing experience!

I followed the shoreline of Cape Tormentine until put me back on Hwy 16 all the way to the Irving Big Stop truck stop in Aulac.  I wasn’t exactly in need of a shower but I definitely needed to do a laundry.  I quickly got a shower credit from another driver.

Within about 2 minutes of arriving at the truck stop I was recognized from my CBC article and I also met a driver that was born and from Grimsby.  They are calling for rain tomorrow and it sounds like Sandy will be driving through on his way to Bathurst.  So there is a good chance I will spend the day here tomorrow.  Sandy was the driver that I teamed up with to get me out here on October 28 to start my ride.

My experience in Prince Edward Island was nothing short of amazing. 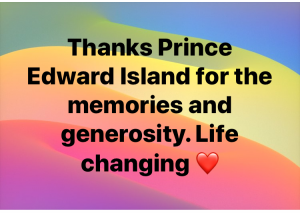 Roads and Shoulders
Only Highway 2 had any shoulder of mention.  I pretty much pedaled the length of Hwy 2 and took a lot of shoreline roads.  None of the shoreline roads that I took had any shoulder that I recall.  Traffic was very scarce given the time of year I traveled PEI.  PEI is also famous for its Confederation Bike Trail.  I was never on this trail at any time due to snow but I came across many many access points along my travels.

PEI is fairly flat will low rolling hills.  I noticed that PEI was noticeably flatter west of the Confederation Bridge Junction.

Two districts/areas that I did not find myself in was Green Gables Shore and the south east portion of the island. 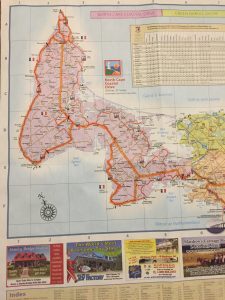 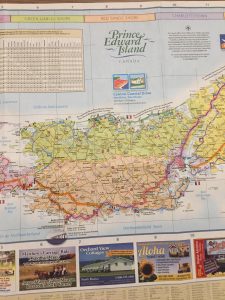 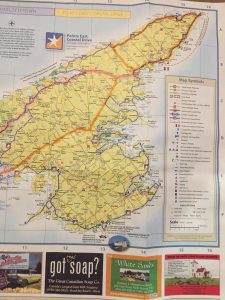 3 down days (2 weather & 1 blogging).  Does not include 9 days off for Christmas

$293.22 spent on 2 new Marathon Schwalbe Winter Plus Tires plus a few other minor items.  I should get about $180 refunded for 2 faulty Schwalbe tires in Halifax.

I should mention regarding food.  More than half my nights in PEI were spent in some ones home.

Check out December 15 to the 31st in PEI here