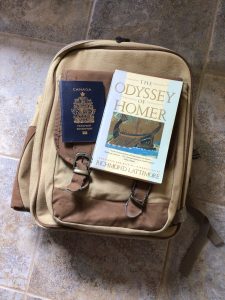 My moms cousin (my second cousin) Trudy Voortman Prins wrote the following blog post quoting me and referencing my bike ride in her latest blog post.  The link to the blog post can be followed HERE.

“Now must you cast off sloth,” my master said, “sitting on feather cushions or stretched out under comforters, no one comes to fame.”
Virgil to Dante, Canto 24, Purgatorio (Hollander)

“Nothing epic happens on the couch,” said my cousin’s son, Arie Hoogerbrugge, as he set off to cycle across the continent one bleak November day in 2019.  He has  crossed Canada east to west and is now on his way to the southernmost point of Argentina. See his website at safariarie.ca.

And he’s right.  Computer gaming is a poor imitation of the breathless risk-taking of a real-life quest.  A pilgrim journeying on the Santiago discovers not only the trail, but much about himself and human nature in general.

Still, the unknown frontier may not be purely physical.  As the philosopher Seneca noted, “We suffer more often in imagination than in reality.”  As we explore our own hearts and minds, we encounter many fears and obstacles. We get bogged down on backroads, enter dark chasms of confusion, procrastinate for fear of failure.  We encounter parts of ourselves we would dearly like to disown, but that clearly seem to have the commitment to dog us throughout life.  Some of these shadows have little substance, but others take advantage of our unique vulnerability.

When we plan a journey, it’s important to make provision and also to calculate timing.  Dante’s version of aged Ulysses’ doomed voyage to the Pillars of Hercules, is a stern warning.  There is a “seize the day,” but also the time to recognize different times call for different types of journeys.

Life generally does a pretty good job of making us face reality, but also in revealing true friendship.     As Arie has found along the way, there will be challenges, but there will also be many encouraging and hospitable people.

So  let’s get up off the couch and be on our way!  While our journeys may not be epic, it may need an epic struggle to discipline oneself.   Learn a new language, practice that piano, tour your own town to name a few options that I’ve seen people pursue in lockdown.   You will be richly rewarded both in the journey and in the goal of your quest.