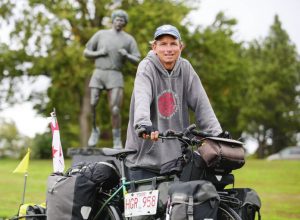 Arie Hoogerbrugge arrived in Victoria the past week after cycling across Canada. He now plans to continue another 40,000 kilometres to Argentina. ADRIAN LAM, TIMES COLONIST

Wherever he goes, wherever he stays, Arie Hoogerbrugge just wants to share a message of hope with the people he meets.

Hoogerbrugge, also known as Safari Arie, arrived in Victoria on Wednesday after completing a 13,000-kilometre cross-country cycling journey — much of it during the pandemic.

He started his journey from the Terry Fox memorial in St John’s, N.L., on Nov. 12 last year. When on the road, he pedals 70 to 100 kilometres a day, though his record is 141 kilometres.

The Canadian part of his journey concluded this week at the Terry Fox statue at Mile 0 of the Trans-Canada Highway.