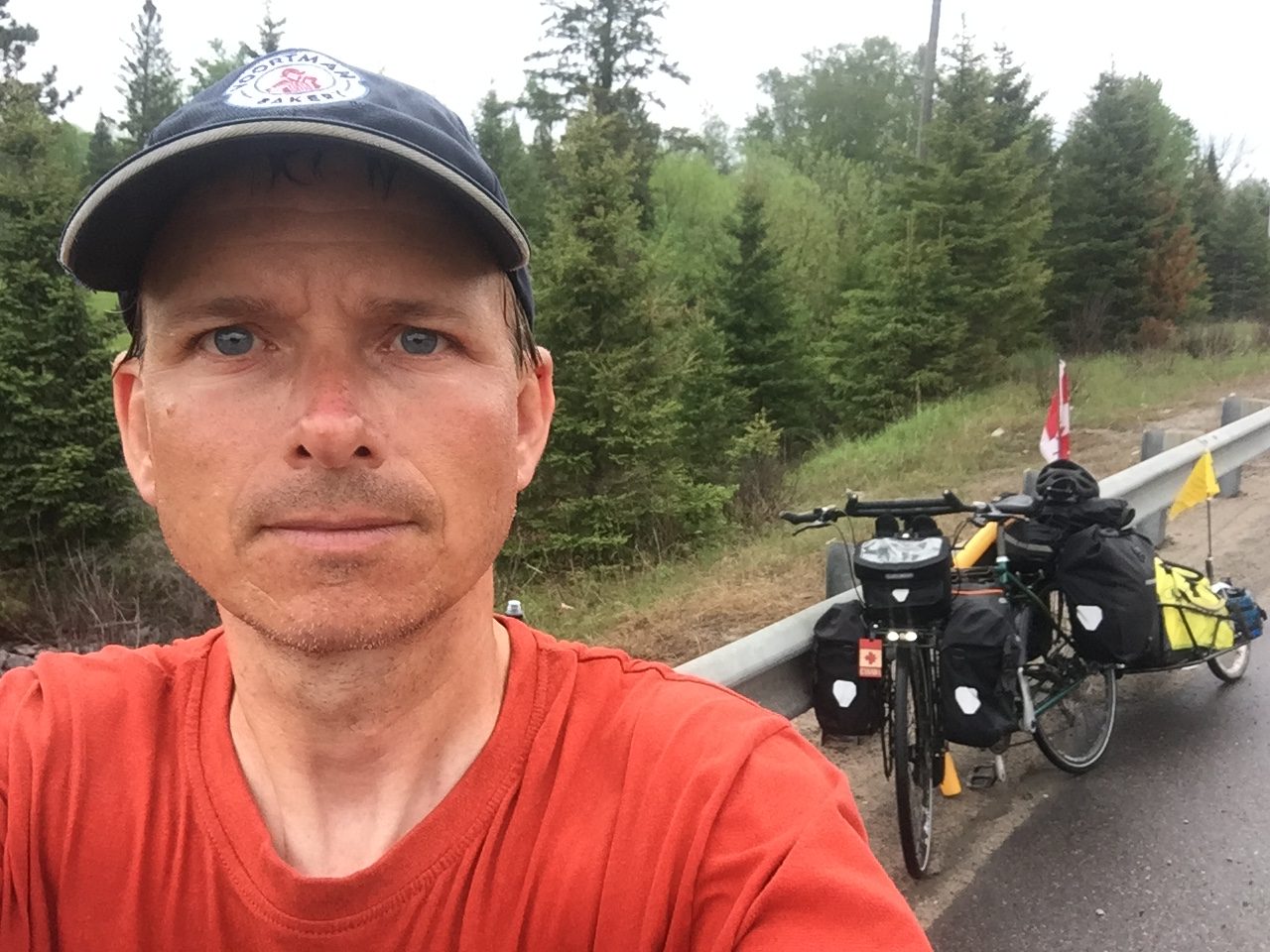 Not even a global pandemic is stopping Arie Hoogerbrugge from completing an amazing 55,000-kilometre trek that began in St. John’s, Newfoundland back in mid-November and if all things work out, end on the southern tip of Argentina in 2022.

The Grimsby, Ontario native has been in the North Bay area staying in his tent near the property of friend and former co-worker Steve Featherstone, who operates the Reptile Camp in Bonfield.

Arie is documenting the journey on his Safari Arie website along with actively updating his Facebook page.

He travelled nearly 5,000 kilometres through Atlantic Canada in the late fall and into the new year.  However, the COVID-19 pandemic forced him to stay in the Kingston area for nearly two months until his recent re-start.

“That was kind of the eve of all the escalation of the COVID-19 virus and restrictions started to lift on May 19 which was about two months later,” he said.  “I am avoiding the GTA to avoid any unnecessary issues.”

The former long haul truck driver is travelling by bike and a trailer where he carries his supplies, technology, tent and his sleeping bag.  He says he first got the biking bug back in 2011 when he did a 6,500 trip across western Canada into northern Ontario.

That journey took him about 14 weeks. “It was such an amazing experience that I wanted to take it to the next level,” said Hoogerbrugge

“It seemed at the time it was a no-brainer, the Canadian Arctic to the bottom of Argentina and from that moment forward that dream was born and crossing Canada sort of got incorporated into that.”

He admits there are challenges cycling during a pandemic. “It is funny because if you follow any of the Facebook groups for biking, most everyone has cancelled their trip or future trip,” he said.

“Restaurants are closed, washrooms are a hard thing to come by and that is part of the reason why I am going through Northern Ontario versus the GTA.”

But he insists, the inspiration he gets from interactions online or in-person during his stops keep him going.

“People still seem to be very friendly,” said Arie noting he was given $5 by a passerby outside a North Bay restaurant he was standing outside of while talking to BayToday on the phone.

“As far as my interactions, I have had no issues whatsoever. In fact, about three hours after I had left Kingston during my re-start, I was taking a small break and a gentleman pulled over and we had a chat because he was a cyclist and he handed me $20,” he recalled.

Hoogerbrugge is planning to continue west towards Sudbury in the coming days. He realizes there is still a tremendous amount of uncertainty about his travel schedule due to COVID-19.

“I don’t worry about it, my plan is to keep peddling until I run into a problem and if I do then I need to pivot accordingly,” he said.

“As long as I have options, I move forward.”