“Safari Arie” is the new Man in Motion 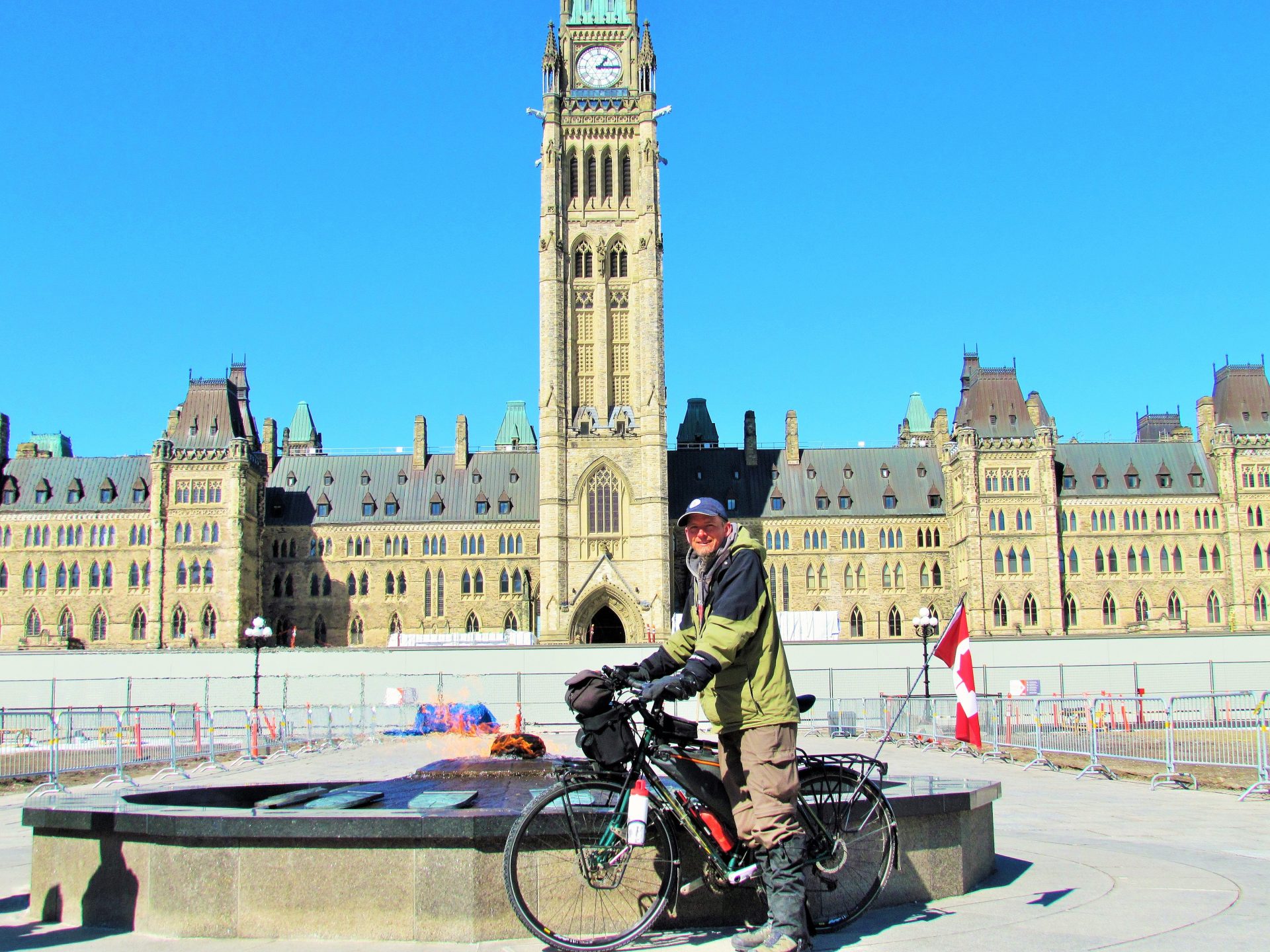 This an article that was written about me and published March 18, 2020 by one of my host’s Andrew Caddell

OTTAWA — Arie Hoogerbrugge is a man on a mission. Two missions, in fact: first, ride his bicycle to Tuktoyaktuk on the Arctic Circle, and then to the southern tip of Argentina for a total of 55,000 kilometres. And once that’s done, he intends to plant a million trees. Not unlike Rick Hansen’s tour of the world in a wheelchair in the 1990s, he is a man in motion.

The bike riding part sounds daunting enough, but consider this: he left St. John’s in late November and continued through the winter. He spent most of December crossing Newfoundland, then on to Nova Scotia and Prince Edward Island for Christmas.  Then Nova Scotia, New Brunswick and Quebec before arriving in Ottawa on Thursday. He has faced withering snowstorms, freezing rain, and heavy headwinds over 4,560 kilometres.

The 46-year-old long-haul truck driver has camped overnight dozens of times, often sleeping in the shadow of a local Tim Horton’s. Photographs of his little tent covered with snow in small towns have touched his more than 2,000 followers on social media. So much so, they have reached out to offer shelter.   “I did not foresee the response I received”, he admits. “I expected to camp most of my time, but Maritimers were very generous.” People stopped him on the road, took them into their homes and fed him, gave him money and generally encouraged him along the way.

As a result, he changed his route through Nova Scotia to travel around the province from Halifax to Yarmouth before embarking on the ferry to Saint John, NB. Then across New Brunswick to Quebec City, Montreal and Ottawa.  He plans to go south to Hamilton before heading to Northern Ontario in April.

Paradoxically, Arie doesn’t like winter, but he was nursing a broken heart after his fiancée split up with him last May, and needed something to take his mind off the hurt. His past experiences with long-distance biking in various parts of Canada inspired him to this marathon, and for an extra challenge, to begin in winter.

As someone who cycled across Canada in the warmer months, I can attest to it being difficult enough in 25 above. And even though I winter biked for my commute in Ottawa, cycling 100 kilometres a day in 30 below is hard to fathom.  Still, “Safari Arie,” presses on, pulling a small trailer with 185 pounds of gear.

His impressions?  “In winter, there is not a lot of pretty landscape, with the exception of the coastline of Nova Scotia.” As a truck driver travelling the continent, he is accustomed to long hours of solitude.  But he admits it is hard to be lonely, “when people are always recognizing me and taking me in.”

He should be in Tuktoyaktuk by summer; from there he plans to head south to Vancouver, the United States, Central and South America. He owns a 40 acre property in the Central American country of Belize, where he has planted trees. This led to considering reforestation on a grander scale, and his second project kicked in.

“I have always been passionate about planting trees for a better environment. I felt, as an unemployed truck driver, I could not get much attention from the public or sponsors to plant a million trees. But I thought I might have some credibility after cycling 55,000 kilometres.”  Arie’s project should resonate with Prime Minister Trudeau and the Canadian Forestry Service, which has been tasked with the government’s Throne Speech promise to plant two billion trees in the next decade as a carbon sink.

At every stop, he is asked if he is undertaking the ride for a charity. So he polled his social media followers on raising money for a cause. A resounding majority was against it, preferring the theme of “one human against the elements.” So he will talk about tree planting, and see if the opportunity presents itself to raise funds for the campaign as the trip continues.

To some, the tall, thin, goateed cyclist might be seen as an eccentric, or even somewhat crazy.  But he set an objective to ride a bicycle through cold, snow and ice, and the kindness he received has warmed his broken heart.  For many long distance cyclists, his story is one to admire, and his cause a good one. In this time of fear and isolation, it is nice to hear of someone who beats the odds.

Andrew Caddell is retired from Global Affairs Canada, where he was a senior policy adviser. He previously worked as an adviser to Liberal governments. He is a fellow with the Canadian Global Affairs Institute and a principal of QIT Canada. He can be reached at pipson52@hotmail.com.  The Hill Times

PDF version of The Hill Times