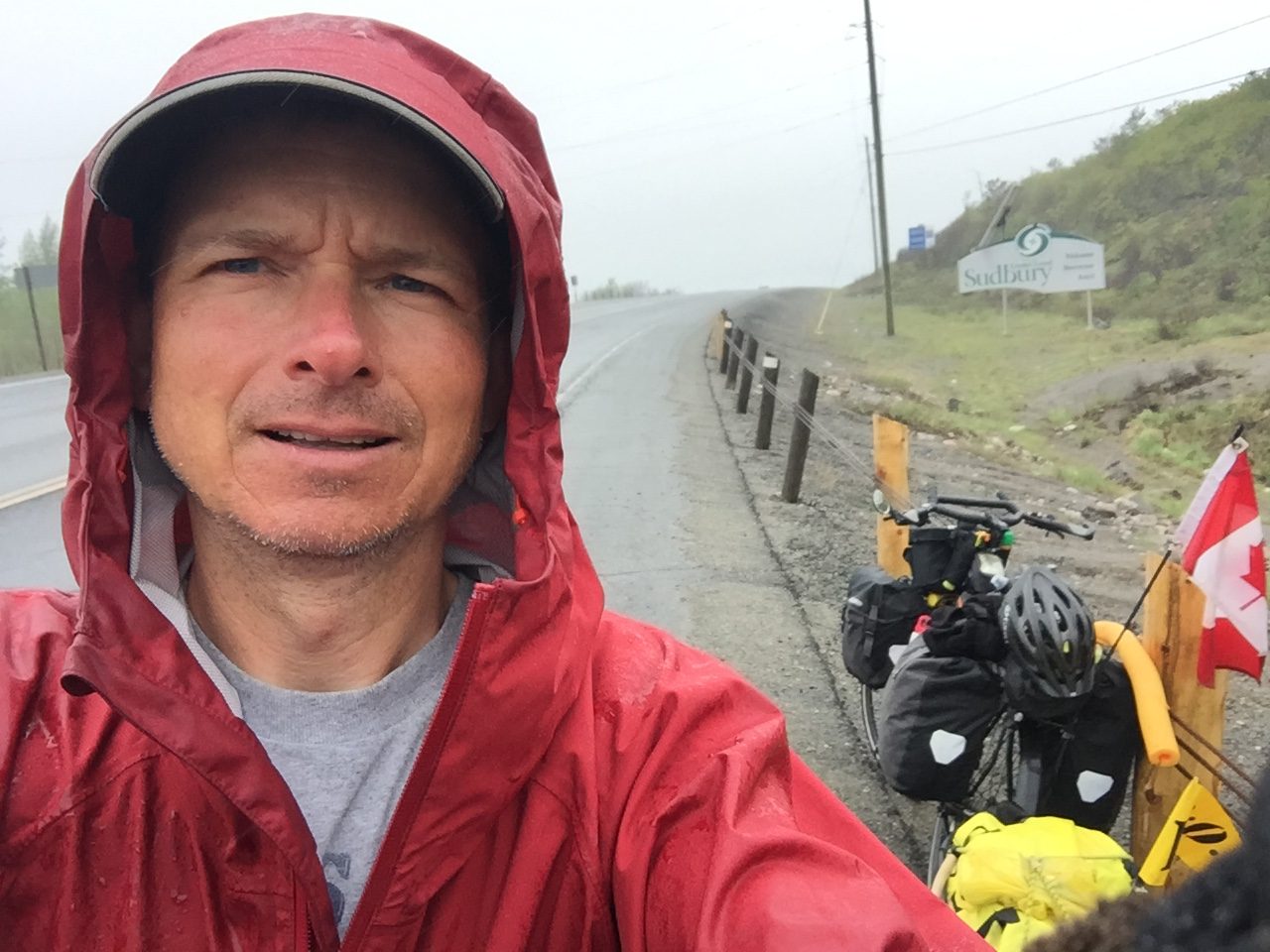 “In my young adulthood, I was into trail riding, full suspension-type trail riding,” said Hoogerbrugge, reached on his way down Municipal Road 55 on Saturday. “That’s actually my idea of fun. It’s kind of interesting — I haven’t driven a car in almost 10 years and I have basically biked everywhere, but it’s not my idea of fun to go biking on the road. When I had a place, I biked everywhere to get everything I needed. But if you said, ‘Hey, what are you doing tomorrow? You want to go biking?’ I would be like, ‘Not really. Who wants to bike on the road?’ ”

It’s the people he meets, the memories he makes, and the ability to document it all, that pull Hoogerbrugge from his bed each morning, rain or shine, and recently prompted him to resume pedalling after a two-month delay due to the COVID-19 pandemic.

“For me, I think what it is, is a combination of all the experiences combined,” he said. “I prefer travel by bike, because with the speed you go, it allows you to interact with your elements and all the different people, but along with my style of travel, I get to camp out every night, which is also enjoyable, and I really enjoy the documenting side of the ride.”

Incredibly, his 2011 excursion wasn’t planned in advance, but was instead borne of necessity.

“I was trying to hitchhike out west and I got stuck in Sault Ste. Marie,” he recalled. “I ended up having to take a Greyhound to Thunder Bay, and I tried hitchhiking again. That didn’t work, so I went back to Greyhound, bit the bullet and got a bus all the way to Calgary. On my way, it was like, ‘Well, now what do I do?’

“I just walked into a bike shop and said, ‘I’d like to buy a bike,’ and they sold me one. Fast-forward 14 weeks and I did 6,500 kilometres through all of Alberta, up to Yellowknife, into British Columbia, the Queen Charlotte Islands and Vancouver Island, and it ended up being the greatest experience of my life — all basically by accident, because no one wanted to give me a ride.”

It also planted the seed that grew into his current adventure, which has already seen Hoogerbrugge cycle around much of Atlantic Canada, across Quebec and into eastern Ontario, before turning toward North Bay, Sturgeon Falls and, by Saturday afternoon, the Nickel City.

“I was like, ‘How do I take this to the next level?’ I was in Northern B.C. and it seemed like a pretty obvious decision to go from the Canadian Arctic to the bottom of Argentina. The moment I spoke that into existence, it became my goal in life and ever since that day, I have been planning for it.

“For the most part, all of my life choices and decisions evolved around making this ride a reality some day.”

There were some “U-turns, scenic routes and dead ends” over the next eight years, including an engagement that failed about one year ago.

“I was engaged, and then one day, I wasn’t,” Hoogerbrugge recalled. “At the same time, I was a long-haul truck driver, working 80 hours a week, crisscrossing North American to California and back, from Burlington, and I had no bike, I had no gear and I had no website at the time, and I basically just gave it everything I had and I got everything put in place.

“I had it in my head that if I really worked hard to get organized, along with my work schedule, I could probably leave St. John’s, N.L. on Dec. 31, 2019, but strangely, everything came together so quickly, so smoothly, I was able to push that up to Nov. 12.”

His parents had relocated to Prince Edward Island 11 years ago, so he made sure to arrive in P.E.I. for his first family Christmas in six or seven years — and possibly his last for some time — before continuing on his way.

He was impressed by the generosity of Maritimers, who provided cash, gift cards and even warm beds as he travelled through their communities.

“I ended up adding 1,300 kilometres through P.E.I. and Nova Scotia, just so I could expose myself to local interactions,” Hoogerbrugge said. “I sort of followed coastlines — in P.E.I., my parents are in the east end, so I went to the east point, then to the north point, then to the west point, then I went back to the bridge, and in Nova Scotia, I followed a good portion of the Bay of Fundy shoreline, on the east side, to Halifax, and followed that coastline from Halifax to Peggy’s Cove to Lunenberg to Yarmouth to Digby, then I took the ferry over.”

That portion took him 28 days and he “only ended up camping on four of those days,” he said. “All the rest was complete strangers reaching out on social media, because I did a few CBC interviews and from there, everywhere I went, I was recognized. I’d be in one town, and there would be a message that there’s a bed waiting for me for me, then the next morning, down the road, there would be a message that there was a bed waiting for me there. It was the most amazing-slash-bizarre situation I ever could have imagined.”

Taking the ferry to Saint John, N.B., Hoogerbrugge travelled on to Riviere du Loup, Que., then to Quebec City, Montreal and Ottawa, and arrived in Kingston on the first day of spring, March 19, after some 4,900 kilometres of travel.

“It was basically the eve of the escalation of this COVID-19 situation,” he recalled. “I got very lucky, because of all things, I happened to have an aunt who I have always remained in contact with in Kingston.”

He stayed with his aunt for two months, until Premier Doug Ford began to lift restrictions, and set out once more.

Despite spending most of his adult life in Hamilton, and knowing several people in the GTA, Hoogerbrugge decided to bypass the area, due of the lack of campsites and washrooms, and to avoid putting any pressure on acquaintances to visit or provide accommodation during a pandemic.

“I was going to go Kingston to Sudbury, but I do have a friend in Bonfield, and if you go to my Facebook page, you’ll see a couple of photos of me playing with an alligator and a couple of big snakes there. So I went up to Bonfield and then I went across here to Sudbury.”

Hoogerbrugge paused on Saturday for a photo at the eastern city limits, then another under the Big Nickel, before continuing on his way.

“I’m just making my way west and I’m not sure what’s going to happen in the future,” he said. “I have to make up for some lost time somehow, so there is a bit of uncertainty, but I’m trying to get myself to the Arctic as quickly as I possibly can, to get that out of the way, but right now, you can’t even go there.”

While he waits for flights to resume, he’ll keep pedalling west, and may get as far as Edmonton before winging his way north.

“There’s a tremendous amount of uncertainty as far as what’s going to happen this fall, but everyone has to deal with that,” he said.

He’ll likely return to Edmonton, then head to Calgary, then Vancouver, before crossing into the U.S. and zigzagging his way through Central and South America.

He estimates the full trip, around 55,000 kilometres, will take around three years.

“This is something I put out to the world that I was going to do, and I think it’s important to keep your word with something you say you’re going to do,” Hoogerbrugge explained. “The other thing is I was a long-haul truck driver for six and a half years and that was actually one of the greatest experiences of my life, but it’s certainly not my ambition or my dream or my goal, and I would like to see this ride somehow open my doors for my future. The reality is I’m 47 and basically uneducated, so it would be interesting to see where all this leads.

“And then there’s the people I have been meeting. It has just been crazy, how interesting some of them are.”

If anyone draws inspiration from his journey, he hopes it will be to follow through on their own plans, no matter how grand.

“Just go for it,” Hoogerbrugge said. “I had someone message me the other week, because they’re looking to bike across Canada and they’re a little apprehensive, with everything that is going on right now, and I said, ‘You have nothing to worry about until you have something to worry about and then, you just deal with it.’

“I joked with the people in Atlantic Canada and I said, ‘Don’t be surprised if you see people do this more often,’ because it now gives them permission to go ahead and do something. It’s kind of weird how, as humans, we’re always waiting on permission to do something, so I say go for it. In the grand scheme of things, you have nothing to lose and everything to gain.”