Cyclist finds kindness in Fort Frances on way to Argentina 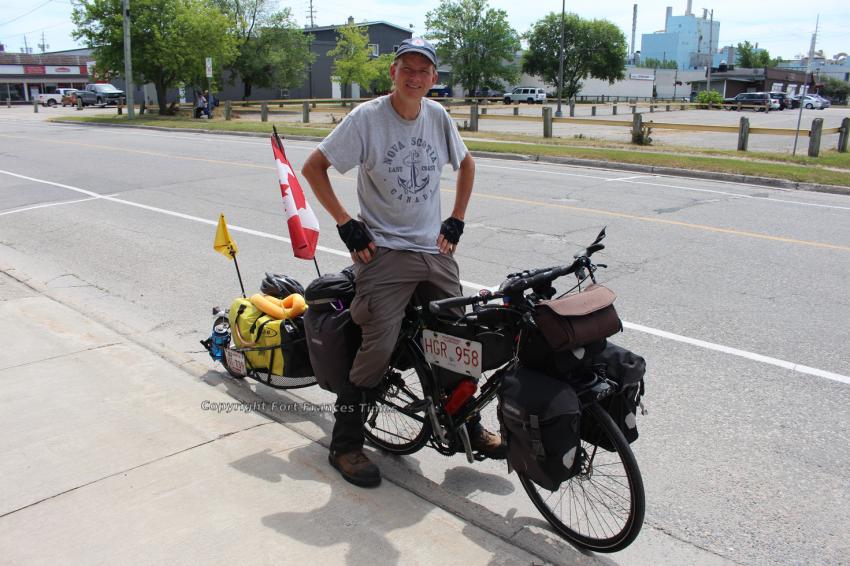 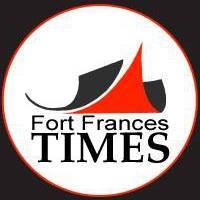 Imagine yourself and your bike, alone, in the eerie depths of roads that stretch over nations. You have nothing but a travel-sized tent and a Canadian flag flapping at the rear of your bike. You encounter storms and thunders, rains and rainbows, deers and bears. Imagine doing this for three years and enjoying every bit of it.

Biking has its many health advantages such as prevention of heart diseases, strengthened bones, reducing anxiety and increased flexibility. But for Arie Hoogerbrugge, 47, it is the combination of happiness, peacefulness, joy of meeting locals and the determination to reach his goal that keeps him going.

Originally from Grimsby, Ontario, Hoogerbrugge spent most of his career working in Burlington, Alberta, Belize and Prince Edward Island.

Hoogerbrugge found peace by the mere movement of his feet pedalling up and down his bike, which at this point, has become his best friend. Hoogerbrugge has one dream, and it is to bike all the way from Canada to Argentina, a trip that is about a 55,000-km bike ride and will take a total of three years.

“I have been biking since Nov. 12, 2019,” Hoogerbrugge said. “I left from St. John’s in Newfoundland and Labrador, and I basically proceeded west last winter and then what ended up happening is that I had tremendous amount of local support and random acts of generosity and random strangers offering me warm beds that I ended up following a lot of shore line through P.E.I. and Nova Scotia and I got into Kingston on the very first day of spring Mar. 19, and I had pedalled 4,900 km to that point.”

This was around the same time COVID-19 escalated in Canada prompting nation-wide border closures and strict reinforcement of delaying all non-essential travel and calling Canadian citizens and residents to follow physical distancing measures. This also delayed Hoogerbrugge’s commute, which made him stay with his aunt in Kingston for 60 days before resuming his ride May 19.

“I made the decision to bypass the Greater Toronto Area so I went Kingston, North Bay, Sudbury and then straight across and then I got to Fort Frances. I actually just broke 7,000 km getting into Fort Frances and I am basically headed west,” Hoogerbrugge said.

“Ideally, my original plan in routing was the Dempster highway to the Arctic, which is still closed and it sounds like it is going to remain closed for the remainder of the summer. So running down, my plan is to basically head to Calgary and then see what is going on with Alaska because the border closure got pushed to Jul. 21 and I suspect I’ll get into Calgary towards the end of July.

Hoogerbrugge said his plan is to Fly from Calgary to Alaska, bike the Arctic’s Dalton highway, then make his way south to Vancouver, then zigzag to the bottom of Argentina.

So far, Hoogerbrugge biked 7,034 km and spent 165 days on the road. Hoogerbrugge said he is not biking for any specific reason, just the mere pleasure of meeting locals.

“During my ride I will experience different cultures and languages, extreme landscapes, extreme weather, extreme isolation and extreme beauty and wonder,” Hoogerbrugge said on his website. “I will experience risk, adventure and danger unlike ever before in my life. I will be required to push everything that I am to its limits. The success or failure of this ride will ultimately be in my own and Gods hands.”

Hoogerbrugge’s first ride was in 2011 and it was through northern and western Canada. He enjoyed it so much that he got in the mindset of questioning how he can take this interest to the next level.

“The moment I spoke that into existence, it has been my goal ever since 2011. What happened was shortly into the playing of that, I incorporated a cross-Canada into that same ride and then all my life decisions and choices generally revolved around making this ride a reality someday. I’ve been going it to fulfill a goal. There is no real reason beyond that,” Hoogerbrugge said.

“I’m kind of prioritizing contacts, connections and interactions with locals through whichever areas I’m going through so I guess if there is kind of a reason, it started just to connect with as many people as possible on the way.”

Hoogerbrugge will finance this trip from the savings that he made as a long-haul truck driver the six and a half years leading up to the trip.

“I saved like crazy,” Hoogerbrugge said. “I’ve always lived a very minimalistic lifestyle for quite a few decades. The last two years in the truck, I never actually had a physical home or apartment to go to. I actually lived in the company truck and just stayed on the road.”

Just like any long-distance trip, travellers should always be extra vigilant for unexpected events that involve stopping for long hours and asking for help. Hoogerbrugge’s situation is no different, perhaps more difficult, since he is using a bike, battling the winter storms and heavy rainfalls.

“I try to use a level of common sense. I am not that fearful or worried about too many dangers in the grand scheme of things. I mean, yes I could get hit by a vehicle on a highway, but I could also get hit crossing the street. In many ways, I do zone out the traffic when I pedal, because if someone is coming behind me at 100 km/hr, what happens is going to happen,” Hoogerbrugge said.

“Every once in a while people will ask me about the bears, but I don’t really worry about that kind of stuff. I am planning to pedal through 24 different countries, if I start worrying about what could go wrong now, I may never leave my current host’s home. I do not want to say I’m fearless by any means, but I just use a little bit of common sense. Bad things happen to good people and bad things happen to bad people. You just do what you got to do.”

An incident that made Hoogerbrugge particularly thankful for local people was when he was trapped in Charlotte town in P.E.I. in the middle of a wicked snowstorm.

“I was sure I would get blown right into a vehicle without a doubt. I remember it was 10:30 p.m. and I was packing up my laptop working at my blogging at a Tim Hortons and this lady sends me this message that there is this warm bed waiting for you,” Hoogerbrugge said. “She only lived minutes away. I ended up spending a few nights with her. That was a real pivot moment where something was going on that I could not ignore.”

Hoogerbrugge made an unplanned stop in Fort Frances when there was a problem with his bike. Fort Frances resident, Tara MacEachern, hosted him for a week while Tagg’s Source For Sports worked to get parts from Kenora.

Hoogerbrugge keeps a blog, at www.safariarie.ca, where he updates his location, writes his reflections from his travel and uploads pictures from his trip. 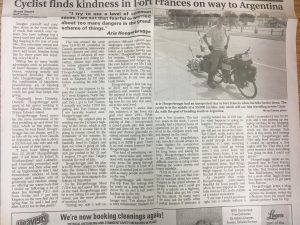