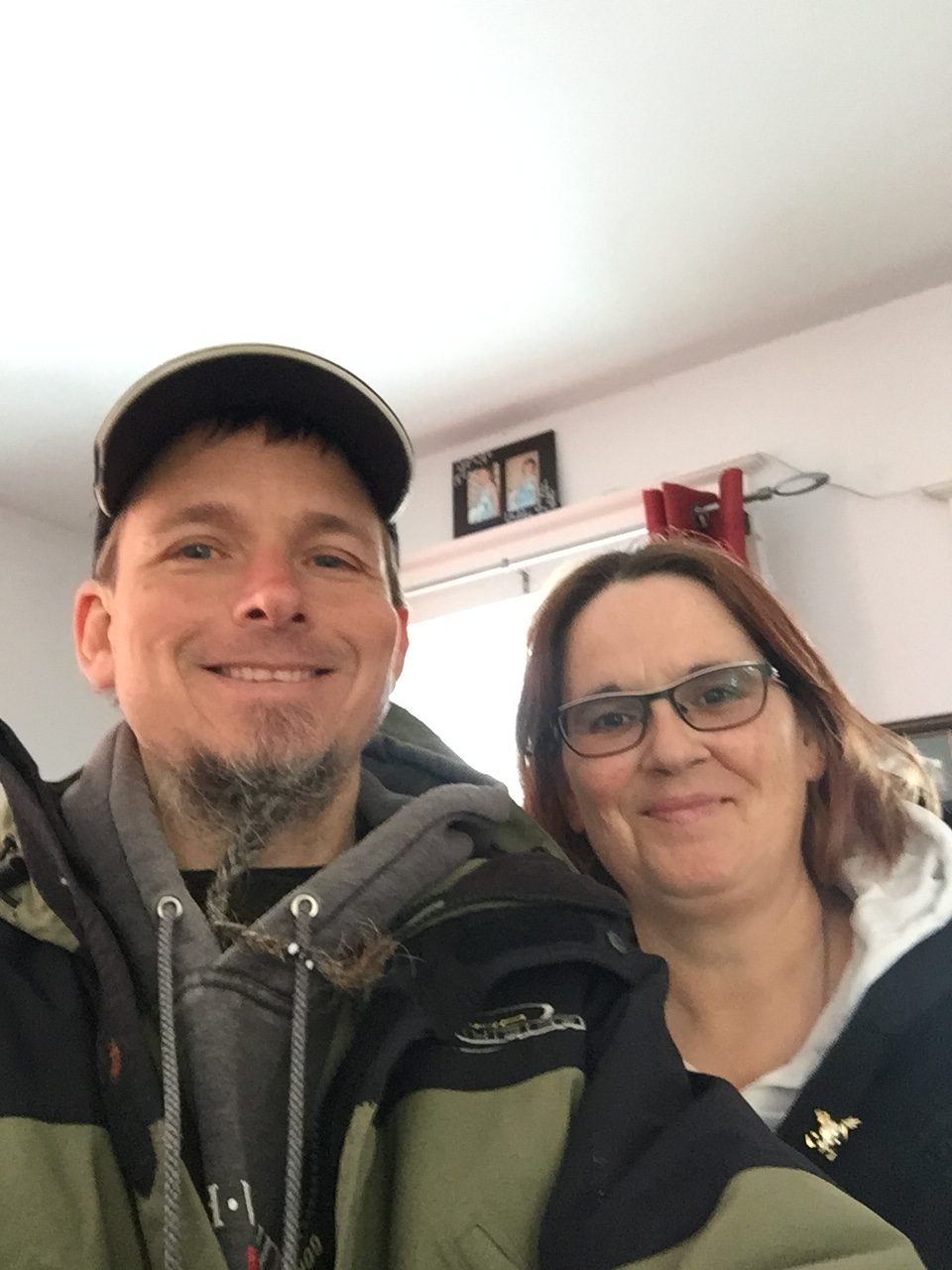 Kim was another person from Nova Scotia that reached out with an offer to spend the night.  I still remember running into a pretty wicked snow storm on my way to her place.  But I made it.  We ended up staying up quite late just talking about stuff.  Our photo ended up making it on the front page of the local newspaper. 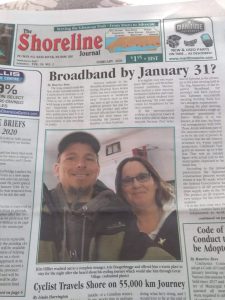 By Linda Harrington
Some of us have problems navigating our Canadian winter on four snow tires, imagine doing it on two narrow bicycle wheels? Arie Hoogerbrugge has been gaining a bit of local attention throughout our Nova Scotia communities as he continues cycling not only across Canada but eventually, he plans to travel 55,000 kilometers to the tip of Argentina, with a few side excursions including Tuktoyaktuk, NWT. His journey began back in November in St. Johns.

On his website Arie says, “Part of the motivation behind my November 11th start date is to pedal a bike across Canada in the middle of a Canadian winter. In my world this is perhaps the greatest challenge that I can come up with that would possibly push me to the point of failure.” Over two months later, Arie is succeeding in pedalling forward and in making friends along the way! Kim Hillier of Great Village heard about Arie’s adventure and when she saw he was going through Great Village on Friday, January 17th she offered him her spare room. “He did take me up on the offer. Got here around 6 p.m. and we sat up till almost 1 a.m. talking,” says Kim, who posted pics on her Facebook page, wishing him well on his journey. “He is an incredible person to be doing what he’s doing, and I would love to be at the end of his journey to hear the rest of the story in person,” says Kim.

She says he has some inspiring poetry on his webpage, and he spent some time explaining the meaning behind some of the writings. “There is a meaning behind them all and once you heard the meaning it made a lot more sense,” she said, adding she encourages people to go to his website and read the posts. Nancy Jennings encountered Arie as he made his way through Glenholme and they exchanged a wave and a smile. She had also heard of his adventure and knew immediately who he was. “To encounter the cyclist, you’ve only just read about on social media that very morning is rather intriguing when you reflect on all of the positive Maritime interactions with strangers & friends this winter cyclist has experienced along his personal trek to date.” Nancy says she will be following Arie’s blog daily to keep up with his experiences throughout this three-year journey.

As of his January 18th online blog, Arie says he had spent 56 days on the road, cycled 2,355 kilometers and slept 29 nights in a tent. He has greatly appreciated the invitations to sleep in a nice warm bed after some gruelling days in sub zero temperatures. Arie feels the weather has been better than expected. “I was expecting the worst but at the same time I didn’t really “think” about the weather at all. I felt if I thought about the weather, I may never attempt this ride during the winter at all,” he says adding, “But I am aware I have been very very lucky with the weather so far.” People Arie has met along the route have been very generous, in true spirit of the Maritimes! He didn’t set a budget for the journey, noting back in 2011 when he did his first bike tour, he spent a fair amount on camp sites, so he had access to a shower. “Obviously I have spent no money on camp sites at this time of year,” he laughs. “But I have found I eat out more than ever expected, which adds up financially. Some restaurants have given me my meal on the house, such as the Rite Stop in Advocate and people have given me meals in their homes, which has been greatly appreciated but I never expected.”

He has also been very appreciative of people handing him a few dollars along the way, which again he says he never expected. Arie has been planning this journey extensively since 2011, mostly planning the route. The opportunity to start this ride came up very suddenly. “I only started purchasing my bike and gear and working on my website since the beginning of June 2019, in addition to working an 80 hour week as a long haul truck driver.” He considers what was accomplished in the short 5.5 months leading up to the ride is in his opinion “nothing short of a miracle”. As for sticking to the planned route, the journey through Atlantic Canada has evolved quickly into something much bigger than Arie had ever expected. “I have probably added at least 1000 extra kilometers to Atlantic Canada just to see who I can meet along the way. Atlantic Canada has been awesome!” he says. “So, at this point I simply go with the flow.” Arie has been taking advice from the local people and enjoying whatever is offered or suggested.

Arie has known from the start the 55,000 km journey cannot be completed without challenges and his career for 6.5 years as a long haul truck driver for Voortman Cookies, driving 1.2 million km across North America he certainly got to know the lay of the land. “Physically, the toughest day was my first day in Newfoundland, pedalling to Cape Spear and back to St John’s. Newfoundland was tough getting into physical shape for the ride.” But biking from Joggins to Advocate to Great Village were also tough. “From Joggins to Advocate my gear shifter froze so I did not have my bottom 6 gears. I had to push my bike over every hill. From Advocate towards Parrsboro I had some pretty hilly areas. Once again I had to push my bike over virtually every hill due to snow and slippery roads.”

This is not an ordinary bike to “push” up hills. The bike and gear weigh about 185lbs. He says Parrsboro to Great Village was probably the worst weather he had to travel through so far, but he enjoyed every day of it. Looking to the future, Arie has a passion for reforestation of rainforest and jungle he will be dreaming and planning for during three years on a bicycle. “I have some land in Belize and I would like to convert some of the land into a nursery that raises millions of seedling trees for replanting purposes.” After leaving Great Village, Arie headed to Truro where a snowstorm gave him a welcome rest stop for a day before he pedalled  off to Windsor, then Halifax and onward to Digby, taking the ferry to Saint John, New Brunswick. We wish him well on his journey and hope to follow him along the way!
Visit Arie’s website at https://safariarie.ca