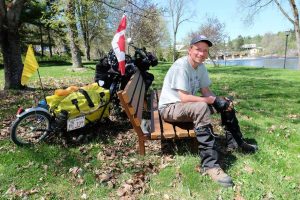 It was a wobbly start, as he couldn’t even get on the weighed down bike to ride it onto the ferry destined for Newfoundland, as he was saying goodbye to his parents. By the time he went through Kinmount, he had ridden more than 5,000 kilometres. His result is proof of his determination. However he is still a long way from his ride’s completion, which will see him travel for three years through 24 countries, including Northern Canada, the U.S. and South America.