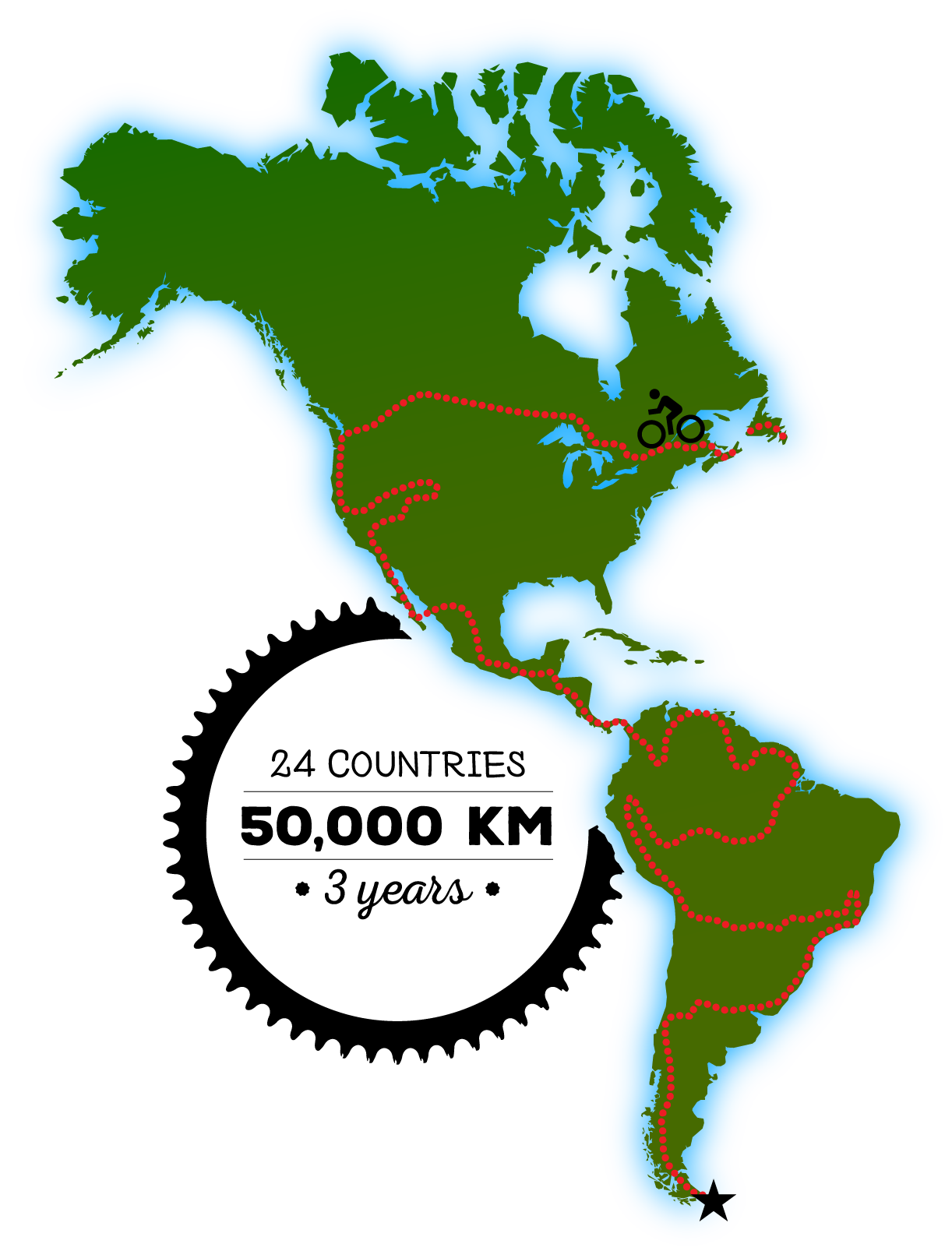 This ride will be completed in two phases.

Now that crossing Canada has been completed, I can pretty much say that nothing went as planed and I wouldn’t change a thing.

I actually arrived in Kingston Ontario on March 19 on the first day of Spring pedalling 4,900 km’s through the 2019-20 Canadian winter.

March 19th also marked the escalation of the Covid-19 pandemic and pretty much grounded me for 2 months.  As a result of Covid-19 when I did get back on the road on May19 I completely bypassed the GTA and made my way north to North Bay and then west across Canada.

The other major change to my Canadian plans thanks to Covid-19 is that I had to completely bypass the Canadian Arctic due to the Arctic being completely closed up.

To put the number of hosts that I had crossing Canada into perspective.  Most cyclists have about 10 and I also biked through a world wide pandemic and completely bypassed where I am from and the most populated part of Canada.

Leaving Vancouver I shall travel the beautiful west coast of the United States.  Reaching California I can hardly wait to see the Giant Redwoods.  The plan is to then ride into San Francisco and then along the coast to LA and then east and north up to and through Death Valley National Park– (one of the hottest places on the planet) and then LAs vegas and on to Utah and then into Arizona and to The Grand Canyon – one of the most amazing geological wonders of the world.  From the Grand Canyon make my way to San Diego.

Upon reaching Mexico I would continue along the Baja California Coast.  When the road ends I will then ferry across and catch a train to Copper Canyon.  A train is required transportation to reach this canyon as there are no passable roads from the coast to a canyon that is even larger and deeper than the Grand Canyon.  The intent would be to then ride straight down the middle of Mexico to Mexico City.  I am expecting very mountainous, arid desert and isolated landscapes through much of Mexico.  I suspect that even though I have been to Mexico many times there will be some getting used to as this will be my first country outside Canada or the US on a bicycle.

I suspect much of the Central American countries that I will ride through – Guatemala, Belize, El Salvador, Honduras, Nicaragua, Costa Rica and Panama will all provide numerous extreme challenges.  I suspect sweltering heat in extreme humid conditions that only jungles can provide will be the norm.  I can only image the mountains, poor road conditions and climate will really start to test my abilities as a cyclist if crossing Canada in the winter didn’t.  Entering Belize on a bike will be so amazing for me.  Belize is a very special for me and is where my home away from Canada is .  I can hardly wait to reach Costa Rica.  There will be so many places to explore in Costa Rica such as Monteverde Cloud Forest Reserve and Tortuguero National Park which is only accessible by plane or boat.  I have to imagine seeing the Panama Canal, considered one of the seven modern wonders of the world will be my last Central American highlight.

As there is no highway from Central to South America I will look to hire a sail boat to get me to Columbia.  In my opinion no trip to South America would ever be complete without reaching the mouth of the mighty Amazon River, the second largest river in the world.  So from Columbia I will continue east to Venezuela.  Admittedly as  I write this, Venezuela has me a bit nervous given all the media in the last few years.  Hopefully things have settled down by the time I pedal through.  From Venezuela to the Island of Trinidad and then Guyana, Surinam, French Guiana into Brazil and then the mouth of the Amazon.   From the mouth of the Amazon I aim to either take a number of boats all the way up the Amazon into Peru.  Or I may also consider riding the Trans-Amazonian Highway;  a dirt road that sort of follows the Amazon River.  That decision will likely be made upon arriving at the Amazon.

From Peru I will have to ride north to Ecuador to reach the capital Quito, to visit the Equator Monument.  Turning around to head south I ride back into Peru.  A stop at Machu Picchu, the most famous icon of the Inca World would be a definite requirement.  From Peru I will ride into Bolivia.  In Bolivia I will ride what is considered one of the world’s most dangerous highways – The Yungas Highway between La Paz and the town of Coroico.  Also a ride through Bolivia is never complete without a ride through the Salt Plains of Salar de Unyuni, the world’s largest salt flat.  From Bolivia I ride into Paraguay to Rio De Janeiro, Brazil and then Uruguay.  Leaving the capital of Uruguay, Montevideo I will take a ferry to the capital of Argentina, Buenos Aires.  From Buenos Aires I would head for the Pacific Ocean and then zig zag my way south back and forth between Argentina and Chile all the way south to Ushuaia, Tierra del Fuego, Argentina – the southernmost city in the world.

What can I say about riding through South America?  My route will take me from the Amazon rainforest, up the Amazon River to the Andes.  I will be criss crossing the Andes, the world’s longest continental mountain range through Ecuador, Peru, Argentina and Chile.  I will ride through unforgiving jungle and desert environments.   I will be riding in altitudes that will be thousands and thousands of feet above sea level.  When I think about and look at other cyclists photos of South America I am almost at a loss of words to explain or describe what I am up against.  South America will challenge me like nothing I could even imagine.

This phase two of the ride should be completed in about two years adding an additional 40,000 km’s pedalled.

In total this epic adventure should last about three years and have me pedal at least 55,000 kilometres in total distance.

The plan is to ride over 50,000 km’s and will have me cycle through some incredible areas.  The following stops would be some of the more notable highlights. By the way; to put this ride into perspective the circumference of the earth at the Equator is 40,000 kilometres around.

Phase 2 – To the bottom of the world

A river trip up the Amazon to Peru

Ushuaia – Bottom of the world